Back to the Home Page

CoMIS was created by a team of Carlson School undergraduate students in February of 2011, who were returning on an airplane from a case competition in Vancouver. They were the second team that had ever attended an international competition in Carlson’s history, and they had really enjoyed competing. 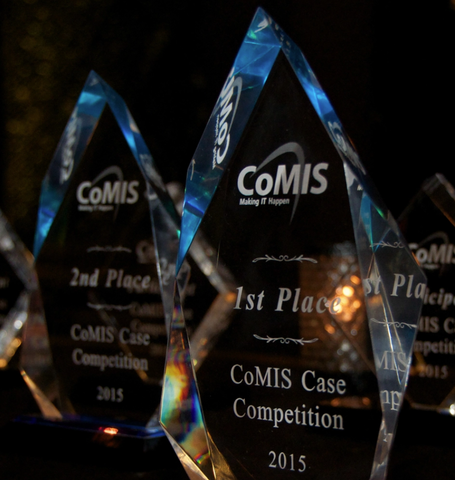 The team coach was in her seat when she looked towards the back of the plane to check on the students when she saw that some of the students out of their seats, leaning over the seated students and talking fervently to each other. Thinking that they should be seated, she left her seat to approach the students. She noticed that they were doodling on an airplane napkin – as it turns out, the students were brainstorming the creation of a completely student-run IT case competition at the University of Minnesota. Their thought process was simple: if they had so much fun competing in these competitions, why shouldn’t Carlson host one?

The group of students went to the Management Information Systems department with their idea. Alok Gupta, then-current department chair, supported the team and engaged Norm Chervany and Ravi Bapna, in partnership with the University English department, to write the first case.

The first CoMIS case competition was held in the spring of 2012 and had eight competing teams.In 2014, the Executive Advisory Board on the Curriculum started giving full support to CoMIS. In 2015, the first CoMIS invitation for an international team was given to Simon Fraser University. In 2017, CoMIS hosted teams from Hungary, Canada, China, Thailand, and Singapore.

Today, the competition is still student-run, and continues to bring together elite student teams from the world’s top MIS programs to offer competing recommendations for an original business case.

The current CoMIS staff thanks Matt Blumberg, Kaitlin Klaustermeier, Jessica Sun, and Yu Wang for the founding of CoMIS. Thank you Alok Gupta for believing in this group’s idea, and to Donna Sarppo for helping the committee since the beginning.  A special thank you to our corporate sponsors and Tim Olson’s coordination – CoMIS would not have existed without their interest and engagement.