At the Forefront of MIS since 1968

For more than 50 years, the MIS Research Center has helped industry professionals and academic researchers connect with one another in order to foster the creation and sharing of knowledge in the MIS field. 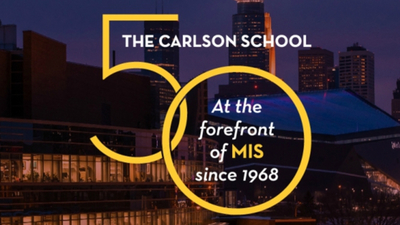 In the fall of 1967, University of Minnesota professors Gordon Davis, Gary Dickson, and Tom Hoffmann began planning for a formal program in the organizational use of computers in information systems. To help inform the curriculum and build the program, the professors sought the support of IS professionals in the business community. To facilitate this academic-industry link, the professors invited internationally select Minneapolis-St. Paul companies known for investing heavily in information systems to join the MIS Research Center. Twenty-one companies joined the MISRC as founding “Associate Companies” the following summer.

As MISRC partners, Associate Companies were able to provide input on the direction of the University’s program, recruit its graduates, gain access to research outputs, and participate in training programs.

From the beginning, representatives from the Associate Companies helped to select research and program topics. Representatives provided valuable perspectives to the academic researchers by reporting on changing industry conditions, needs, and trends.

The first year of the MISRC featured lectures by nationally known speakers, including Alain Enthoven of Stanford University and James Emery of the University of Pennsylvania. In the years that followed, the speaker series evolved to become one of the core activities of the MISRC.

Originally housed in the basement of Blegen Hall on the University's West Bank campus, the MISRC established an office next door to a computer center with a CDC 3200 (purchased in 1968 partly with MISRC funds). Gordon Davis (pictured) became the first director of the MISRC, and reported directly to the dean of the School of Management (then the College of Business Administration). Two part-time secretaries provided support; graduate assistants helped as needed.

After the first two years of operation, it became clear that a senior faculty member alone could not adequately perform all of the needed MISRC functions while still teaching, conducting research, and guiding doctoral students. In response, the position of assistant director was created. Through the years, this invaluable position has been filled both by University appointees and by Associate Company personnel.

In March 1977, a joint venture of the MISRC and the Society for Information Management published the first issue of MIS Quarterly, an academic journal originally based out of the MISRC offices. MIS Quarterly caters to both the academic and practitioner IS communities.

James Wetherbe, formerly associate dean of administration and associate professor of MIS at the University of Houston, joined the University of Minnesota MIS faculty in July 1980 and became the new director of the MISRC. Professor Wetherbe brought valuable management experience in industry and administrative experience at several universities. This enabled Professor Davis to devote more time to leadership of the MIS academic area, and in 1981 Davis became the first Honeywell Professor of Management Information Systems, an endowed chair specifically designated for MIS, fittingly bestowed upon a pioneer of MIS in academia.

In 1985 the MISRC and MIS Quarterly  moved to the third floor of the new Hubert H. Humphrey Center. Besides having windows for the first time, the move brought the MISRC onto the same floor as the MIS faculty.

Over the decades, the MISRC has partnered with numerous companies on research, programs, and other initiatives of importance to the corporate IS community. At the same time, the University’s academic programs have educated thousands of information systems students who now work, teach, and conduct research around the world.

In 2018, we celebrated our 50th anniversary with an event and conference that brought many former students, faculty members, and industry partners back to campus. The University of Minnesota is proud to have played a significant role in the development of information systems as an academic field.

To learn more about MISRC, our research, and partnership opportunities, contact: