The Significance of Collaboration

Last April, nine students traveled to the College of Food, Agricultural and Natural Resource Sciences’ (CFANS) dairy plant on the St. Paul campus to make ice cream. The students were from a startup company developed in the Carlson School’s Entrepreneurship in Action course.

The students developed and brought to market Musa, non-dairy and low-calorie banana-based frozen ice cream, and sold more than $3,000 of products during spring semester. The final production run was at the St. Paul dairy plant.

Could the company have been as successful if it didn’t have a production facility so readily available on campus? Perhaps, but the ease of access was surely a plus.

“We could not have gotten to the point we did without CFANS,” says Carlson student Anne Nelson, a co-CEO of Musa. “Every step of the way, the food plant staff were extremely helpful and did everything they could to help us be successful. They recommended recipe changes and helped us get certified with the state government for production licensing.”

The team itself also went through a recipe change. “We started with eight Carlson students and realized with no experience in food, we needed the help of a student with a food science background,” Nelson says. So, working with the U’s Food Science and Nutrition Club, the team brought in a CFANS junior majoring in nutrition.

Musa is just one example of the power cross-campus collaborations can have. In this instance, students harnessed its power to pick up valuable entrepreneurial experience in developing a new and successful product. In other cases, collaboration is used to alleviate challenges facing all of society.

Recently, University President Eric Kaler called the University of Minnesota a “remarkable college of people, ideas, and impact.” It was in this spirit that the U launched its Grand Challenges Research grants in 2016. Aggressively promoting interdisciplinary collaborations, the grants offer seed funding for projects addressing the critical issues of today.

Several Carlson School faculty, teaming up with colleagues across campus, have received these grants and are currently working on their proposals. Professor Myles Shaver, the Pond Family Chair in the Teaching and Advancement of Free Enterprise Principles, is a Co-PI on a project to create a Shared Leadership Lab to study different forms of shared leadership to see which is most successful in various contexts. There are nearly 30 team members on the project, including Work and Organizations professor Aaron Sojourner. The other Co-PIs are from the Humphrey School and the School of Music. In total, the team received a $300,000 grant, with a $50,000 international enhancement award. 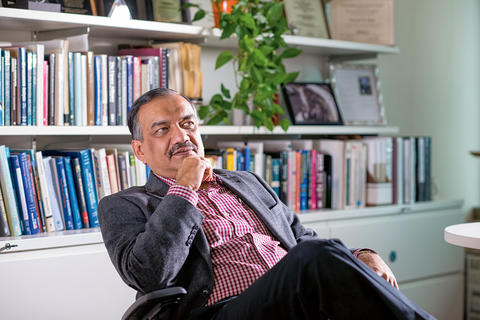 The largest grant possible, $500,000, was awarded to “Minnesota Precision Medicine Collaborative: Transforming Health and Advancing Equity” to be studied by Mosaic Company-Jim Prokopanko Professor of Corporate Responsibility K.K. Sinha and coinvestigators from the Academic Health Center. Precision medicine is an emerging approach for disease treatment and prevention that takes into account individual variability in genes, environment, and lifestyle for each person.

While the promise of precision medicine is clear, Sinha’s program of research is distinguished in that it is focused on designing and sustaining healthcare supply chains that can deliver on that promise and make the access to precision medicine affordable and equitable to not only individual patients, but entire communities that have long faced serious health disparities.

“In my program of research that is motivated by contemporary, consequential, and complex real-world business and societal problems such as healthcare disparities, an inter-disciplinary approach enables a holistic understanding of the problems so that my associates and I can bring to bear relevant theories and methods from multiple disciplines to structure, analyze, and address the problems so as to yield actionable insights for decision makers and policy makers,” Sinha says.

Having the Best of 2 Disciplines

“As I was considering grad school, I knew an MPP [Master of Public Policy] would be a natural fit, given my policy background,” she says. “But I had also heard about Carlson’s Medical Industry Leadership Institute, and that led me to start exploring the MBA as a way to broaden my skills.”

Ultimately, she wanted to understand both the public and the private sector parts of the health system and be able to speak to and build bridges between these various stakeholders. “Given that goal, a dual MPP-MBA seemed like the perfect degree program,” she says.

As one of 17 dual degree students in the MBA program, de Vries says the biggest challenge is bringing both disciplines to bear on your work—it’s easy to keep them siloed or let one side dominate your career.

“The greatest part of the dual degree program is getting to experience the best of both worlds simultaneously,” she says. de Vries notes the Humphrey School of Public Affairs’ curriculum takes a deep, systemic perspective, and students learn how interconnected their field of interest is to any number of other policy issues. Meanwhile, the MBA program gives students the tools to navigate those complex, interconnected systems and get things done.

Christov Churchward is also pursuing a dual Master of Public Policy (MPP)/MBA degree because his target industry—electric utilities and immediately related fields—are both heavily regulated and going through a business model transitionary period.

“Having a deeper understandings of state, federal, and utility commission policies, as well as a background in nuts and bolts business and strategy are both relevant for my career trajectory,” he says about his decision to go for a dual degree. “I also wasn’t sure exactly what sector of the electric utility industry I wanted to enter, so I was excited to take advantage of the opportunity for two distinct summer internships.”

Churchward says that from an academic perspective, there’s nothing inherently more challenging about a dual degree than any single degree. He’s completed two of his three academic years and completed his second summer internship—both have been great, he says. “Three academic years will be worth it for me, but it’s a long time,” he says.

His summer internships, one at Great River Energy and one at the Midcontinent Independent System Operator (MISO), have been one of his most valuable experiences. “Humphrey has a fantastic mentorship program that pairs students with professionals in the industry and I have been fortunate to have two great mentors,” he says.

Internships aside, Churchward is quick to name off other areas which he found valuable. “I’ve really enjoyed the intimacy of Carlson, the hands-on learning through the Ventures Enterprise, and close friendship with my classmates,” he says. “At the end of the day, I’m a pretty social person, so organizing intramural sports, camping trips, and generally having fun outside of the classroom with friends has been the real value beyond the academics.”

Churchward jokes that what he got out of a dual degree instead of taking them separately was one more year of his life. “I would never recommend completing the degrees separately; there’s way too much overlap, which is why they have the dual degree,” he says. “From the outset, if I had to choose one or the other, I would have chosen the MBA because those were the skills I wanted to acquire most. But without my year at Humphrey, I would have lost out on working at the Institute on the Environment, my STEP cohort, and some great classes specifically focused on energy.”

And Churchward made every use out of his extra year. Although he grew up in Minneapolis, he lived elsewhere during his undergraduate time and for five years after. “I intentionally went to the U for grad school because I love the Twin Cities and knew I wanted to move home. But I didn’t have any professional contacts here, so I was a little bit at a deficit in a relatively small industry locally,” he says. “So having the extra year to attend events, make connections, and generally get involved has been tremendously valuable for me.”

Students with dual degrees or those with campus experiences outside of their major domains can be a premium in the marketplace. “As we look at candidates, we put a high value on it,” says Nicholas Koewler, talent acquisition manager—college relations, at Land O’Lakes.

He uses the Carlson School and CFANS as an example. “We love students with a dual degree or a major in one and a minor in another,” he says. “They get both understanding of applied economics and agronomics as well as finance.”

Koewler says students involved in cross-campus activities such as student clubs tend to be able to maneuver across different functions. “Those who have opened their college careers with cross-functional experiences have been able to come in with a great sense of business acumen,” he says. “That’s experience we want.”

Of course, Land O’Lakes doesn’t discount students who have stayed solely within Carlson—they’re usually at the top of the pack. But sometimes, students want to have that extra edge.

“At companies like Land O’Lakes, we do a lot of rotation. Students with that cross experience really do set themselves apart as we look to rotate talent here,” Koewler says. “We hope the University continues to work across those college campuses to promote those different experiences.” 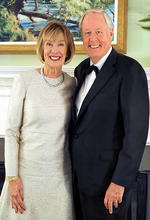 John Lindahl is a 1968 graduate of the Carlson School and his wife, Nancy, graduated the same year from the College of Education and Human Development. Although they were from two very different parts of the University, they are used to viewing campus through a wide lens—as they have touched nearly every part of it.

Currenty serving as co-chairs of the U-wide Driven campaign, these longtime benefactors’ gifts to the U are numerous. Just as numerous are their reasons for contributing. One is Gopher pride. “We spent five years bringing football back to campus,” Nancy says. “We contributed to the new Siebert Baseball Stadium because we like Coach John Anderson so very much. We’re very maroon and gold.”

The Lindahl’s $17 million gift to the U in 2015 went in part to fund the new Athletics Village, and the village’s Land O’Lakes Center for Excellence is now home to the John and Nancy Lindahl Academic Center. “We’re proud of the academic record of our athletes,” Nancy says.

Other reasons to give were more poignant. They have a named room in the Masonic Cancer Center in memory of a lost infant son. Similarly, the U has received funding from the John and Nancy Lindahl Children’s Heart Research Innovators Fund.

“Northrup is extremely important to us,” Nancy says. “My dad died in cap and gown at the [U President Ken] Keller inauguration. We did not want that building to remain empty.”

As an alum, John also likes to give back to the Carlson School. “It is the engine for the state of Minnesota,” John says. “It drives leaders and really sets the pace and the standard for the kinds of people who are going to be the leaders of our community and of our businesses.”

And then there are their scholarships. From military to business to education to athletics, you can tell the Lindahls want to help everyone at the U, probably because everyone is interconnected.

“We have met with many of the different units throughout the University system,” John says. “They are all related to one another and they support one another.” Nancy agrees. “That’s one of the things that has always resonated with me,” she says. “I was part of the inaugural committee when [U President] Kaler arrived and he really talked about cross pollination and that the world needs to know that colleges are not isolated as we draw the best from each other to solve the world’s problems.” 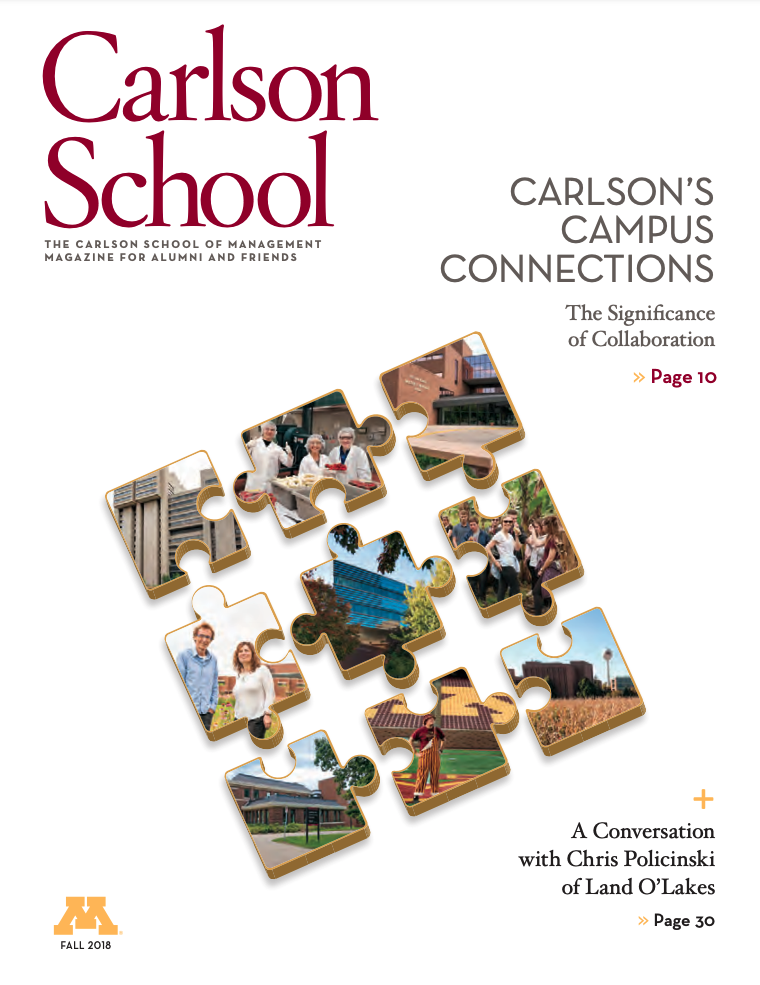