Xiaofeng Qiu spent almost 14 years at Midea, a Chinese electrical appliance manufacturer. His entire working experience had revolved around kitchenware products, and he was hungry for new ideas and to live outside of his comfort zone. So, he enrolled in the CHEMBA program.

It was easy for Qiu to know where to focus his energies. Chinese kitchen tool consumption has seen a tremendous surge in the past decade. The most influential brand is Zwilling from Germany—there is no well-known Chinese brand. “To me, there is a blank market waiting to be filled,” Qiu says. “‘Fill this gap!’ I told myself.”

After graduating from CHEMBA in 2013, Qiu began his business the next year. In 2015, he resigned from Midea to devote himself full-time to his new enterprise. “In order to learn about Chinese home knife products and user habits, I decided to study the market by myself,” he says. So, armed with a grindstone and the help of some friends, Qiu traveled to 10 cities in 10 months. By offering grinding help to people free of charge, he was able to experience different knife brands and their functions.

Last October, Qiu registered a new company called Natie. Its mission is to make a kitchen knife China can be proud of. “Our first five-year goal is to make Natie a Chinese Zwilling brand,” Qiu says. “I will always remember that our business is entirely from CHEMBA. We will never forget your support. It empowers us to continue our mission and move forward.” 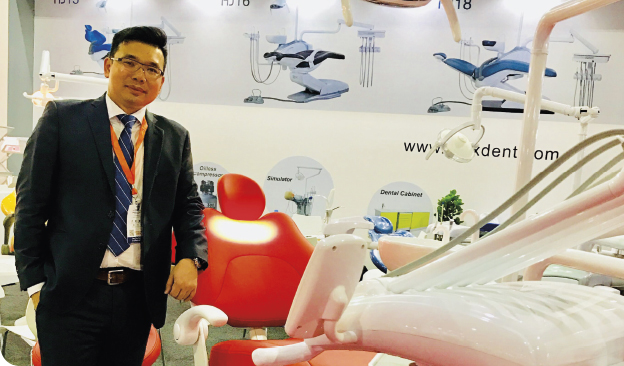 Finding a “Cavity” to Fill

Atwood Shenglin Li majored in international trade from the Guangdong University of Business and Finance. After five years of helping small Chinese manufactures increase their global reach, he realized he could be selling his own products to the world. In 2005, he founded a general trading company, which, among other things, sold dental chairs.

Although the business was doing OK initially, it had less sales in developed countries. “I started to search for better solutions to develop these markets,” Li says. “My wife, who graduated from CHEMBA in 2009, suggested I join this valuable program which helped her a lot in her career, so I became a CHEMBA student in 2013.”

Li’s company, Guangzhou AJAX Medical Equipment Co., Ltd., has since become a famous brand of dental chair in the Chinese market and is now selling 7,000 chairs a year to more than 50 countries, including the United States and Japan. Li’s global mindset and a market fit concept led to the expansion of the company. AJAX acquired one local dealer in Italy to be its European branch in 2015 and its Australian company was started in 2016. In 2017, it established its U.S. branch, AJAX Dental System, in California. It is one of the very few Chinese dental chair manufacturers to get FDA approval.

“What CHEMBA gave me is not only the knowledge but also the determination to make a global business, no matter how small your company is and how narrow your industry is,” Li says.