When a business based in Hungary is searching for the best rates to borrow money, it can often find it in a foreign currency. Why is it then that this business and others like it elect to not go that route and instead borrow in the native Hungarian forint?

New research from Assistant Professor Juliana Salomao, titled “Exchange Rate Exposure and Firm Dynamics,” explores which types of firms choose to borrow in a foreign currency and which elect to do so in a local currency.

Salomao and her co-authors examined firms in Hungary, where they were able to study the balance sheets from every firm in the country. They found that only about 30 percent of the firms chose to borrow in euros, which would provide the firm with a lower rate.

What they found was that these firms tended to be more productive and able to tolerate more risk than an average firm.

“Even though the base rate is lower for all firms to borrow in euros, once you compound that with the risk coming from the exposure of currency, only those firms that this risk is small is it worth it to borrow in euros,” Salomao says.

Firms that can tolerate more risk of being exposed to a currency that is not their own are the ones choosing to borrow in foreign currency. The research also found that since these firms were able to get lower financing rates, they were also able to grow faster than their competition.

“There is a real benefit to having access to this additional source of funds,” Salomao says.

“The fact that the banks work well in identifying this risk and do allocate this cheaper funding to only the firms that can tolerate the foreign exchange risk shows that there’s a benefit to liberalizing the economy and allowing firms to borrow in a foreign currency,” she says. “This tells you that if countries are thinking about whether they should liberalize or reform their banking sector, understanding the risks of firms is really important.”

“Even though the base rate is lower for all firms to borrow in euros, once you compound that with the risk coming from the exposure of currency, it only makes sense for the firms that can handle that risk to borrow in euros.” 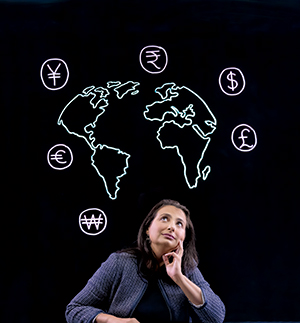 Understanding this concept could have far-reaching implications here in the United States. Because the U.S. dollar is the dominant currency in the world, if a foreign entity defaults on its loans, that country may choose to no longer invest in a foreign currency.

For instance, if the Chinese housing sector defaults and large real estate companies in China borrowed money in U.S. dollars and can’t pay their debts, the Chinese government may choose to stop holding U.S. Treasury bonds because they need liquidity. That then would affect the financing cost in the U.S.

“It’s crucial to understand how the world’s economy is interconnected,” she says. “Although these financial shocks may be far away in China or in the European Union, understanding how those shocks are going to impact each other is extremely important.”