Conflict has long been thought to occur on a team level. Meaning that if conflict exists, every team member is affected by it. However, new research is turning that traditional thinking on its head. A paper co-authored by Carlson School of Management Associate Professor Pri Shah suggests answers lie at different levels.

“[Our findings] provide a new road map for how to do conflict research,” Shah said.

Published in Administrative Science Quarterly, Shah and her colleagues analyzed conflict within teams to better understand where conflict originates, how it evolves over time, and ultimately, affects team performance.

They completed a series of three studies: a qualitative study of conflict narratives shared by students enrolled in an executive management course; a longitudinal study of undergraduate students in a group project over the course of a semester; and a field study of employee teams at a Chinese electric bicycle manufacturer.

“Understanding where conflict originates and how it evolves over time provides managers with an opportunity for more targeted conflict resolution.” 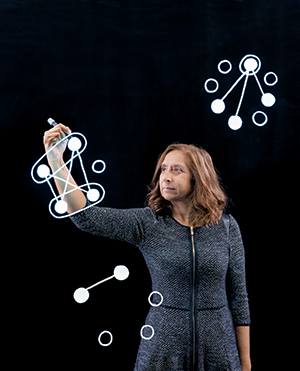 The researchers determined team conflict is not uniform, shared, or static—a significant departure from longtime assumptions—and found conflict involving a whole team is rare. Instead, conflict more commonly starts at smaller levels within the team. Disagreement between two people is the most frequent point of origin. Experiences for each team member are also unique as they could be the instigator, a participant, or an observer of the conflict.

“I think the main takeaway [for managers] is you really have to have a good handle on knowing the social landscape of your team,” Shah said. “Understanding where conflict originates and how it evolves over time provides managers with an opportunity for more targeted conflict resolution.”

It also informs when managers may want to wait to intervene. Team performance saw a positive influence when task conflict originated from an individual or between two people, even though the other team members weren’t directly involved.

“That’s when you really get the benefit of having constructive controversy or diverging opinions and debate within your team,” Shah said.

For example, in a meeting of five people, there may be two individuals who start to take different sides on how to solve an issue. Their discussion then sparks a creative solution amongst the team, ultimately increasing the team’s overall performance. While only two people were involved in the conflict, the entire team experienced the benefit of the conflict. Research showed the same benefit did not exist when there was task conflict among all team members.

Surprisingly, the researchers found conflict tended to be “sticky” and persist where the conflict originated instead of the commonly held “bad apple” notion that it would spread over time and infect the entire team. While the cause of this remains unclear, Shah says this offers good news for managers.

“This means you have some time to diagnose where the conflict resides before trying to resolve the conflict. The conflict is likely to be contained to where it started and not diffuse quickly throughout the team,” said Shah.

“Instead of looking at it as a team-level phenomenon, now we’re seeing there’s something within the dyadic relationship within the team when you’re looking at the conflict relationship,” she said. “And from that you can figure out what the configuration of conflict is within a team and see where it originates and how it evolves over time.”

“Things are Not Always What They Seem: The Origins and Evolution of Intragroup Conflict”
Ferguson, A.J., Jones, S.L., Peterson, R.S., and Shah, P.P., Administrative Science Quarterly, (2021 )