During Financial Crises, Cash Payments Can (and Do) Help

When the COVID-19 pandemic erupted last year, the federal government sought to mitigate the effects of the economic downturn through the Paycheck Protection Program and stimulus payments to individuals. A decade earlier, during the financial crisis of 2008-2009, programs were established that allowed government to lend to cash-strapped businesses. 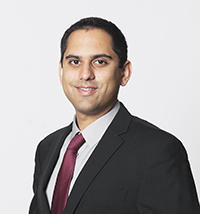 But do such programs work? “That is what we try to shine a light on in the paper,” says Richard Thakor, a Carlson School assistant professor of finance. That paper, The Effect of Cash Injections: Evidence from the 1980s Farm Debt Crisis, was recently published in The Review of Financial Studies. Thakor co-authored the paper with his PhD advisors at the Massachusetts Institute of Technology (MIT): Nittai Bergman (now with the Berglas School of Economics at Tel Aviv University) and Rajkamal Iyer (currently teaching at the Imperial College Business School in London).

The idea for the paper, Thakor says, “came from a pretty classical idea in finance that has had a lot of influence but to our knowledge hasn’t had a very thorough test.” He describes this idea, called a financial accelerator, this way: “When you have a lot of financial frictions, like people having trouble getting needed money or credit, any sort of shock -like the economy going bad- can be amplified across time.”

The effects of different financial frictions on small businesses, and the effects of government payment programs on those frictions, are topics that have long intrigued Thakor. To see how the financial accelerator idea works in real life, he and his co-authors chose to look not at government stimulus payments but at something different, and surprising: the impact of temperature changes on Iowa corn yields during the farm debt crisis of the 1980s.

Why? “If we looked at cash payments just during the debt crisis or the financial crisis or even during the pandemic, it’s hard to tell whether those are good or bad because a lot of times, the government is targeting the companies that are performing the worst,” Thakor says. In such situations, “there might be a positive cash flow effect from a cash flow transfer from the government. But we would have difficulty seeing it.”

By looking at temperature’s impact on corn yields, “we’re looking at cash flow shocks that are completely random and are not targeted or controlled by the government,” Thakor notes. This “traces very cleanly what the effect of that is. That allows us to translate what that effect would be during other times of financial crises.”

During the 1980s farm crisis, just one unseasonably hot day could reduce annual yields by about three percent, significantly hurting farm income. “Whereas when we looked outside of the farm debt crisis, we actually didn’t find any effect” on income,” Thakor says. In non-crisis periods, farmers and ag-related businesses can mitigate shocks through borrowing. However, during crises, money is tight, banks aren’t lending, and the effect of the financial shock “accelerates” through the economy.

That is, unless the government steps in. What Thakor found is that every $1 of government cash transfer received during a crisis generated $1.60 in additional income. A cash transfer “helps to strengthen the financial sector,” Thakor says. “We see a lower probability that banks will fail, for example.” In sum, “programs that give companies and individuals money during times of crises actually do have beneficial effects.”

It’s a conclusion that, given the economic challenges of the pandemic, is “very applicable to what’s going on today,” Thakor says.