Critical Reviews and the Power of the Crowd

The numbers are staggering. Today, Amazon has close to 60 million books for sale. Spotify lets users choose from a catalog of 70 million tracks. And Hulu, Netflix, and Amazon offer a combined total of nearly 90,000 movies and TV shows.

In short, we’re drowning in content these days. And while that seemingly endless number of choices can feel liberating— it also presents a challenge. With so many options at your disposal, how can you decide on what to watch, listen to, or read? Associate Dean Joel Waldfogel used the book industry to explore that question. More specifically, he looked at how pre-purchase information affects consumer book-buying.

As Waldfogel explains, “pre-purchase information” refers to the ratings and reviews that help you decide what books to buy. Well before Amazon launched its online bookstore, many consumers looked to professional critics for guidance on what to read, with the New York Times Book Review as the widely accepted standard. And while the Times book reviews and recommendations remain a popular cultural mainstay, its reviewers simply can’t keep pace with the ever-expanding library of available titles. “In that sense, digitization has created a problem,” says Waldfogel. “But it has also created a solution in the form of Amazon’s crowd-based star ratings system, which helps book buyers make informed decisions.”

“The New York Times raises awareness by alerting people to new books they otherwise might not have known about,” he says. “At the same time, Amazon book- shoppers tend to already know about the book or books they’re looking for. The star ratings give them a quality assessment—the ratings can help them decide whether or not to buy it.” 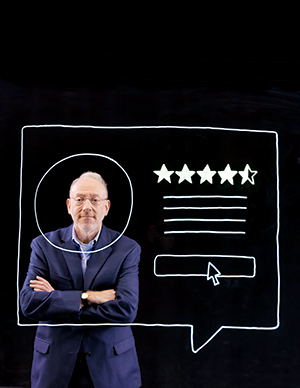 Waldfogel adds that professional and crowd-based reviews operate in a fundamentally different but often complementary fashion. “The New York Times raises awareness by alerting people to new books they otherwise might not have known about,” he says. “At the same time, Amazon book-shoppers tend to already know about the book or books they’re looking for. The star ratings give them a quality assessment—the ratings can help them decide whether or not to buy it.”

That understanding helped lead him to a second line of inquiry: Do professional reviews and crowd ratings make a tangible impact on demand? And if so, how big is that impact? The results were clear for the New York Times. Waldfogel found that a book’s sales climb by at least 55 percent in the five days after a review and by 2.8 percent over the course of a year. In contrast, Amazon doesn’t reveal sales figures for individual books, but Waldfogel’s analysis determined that the elasticity of sales with respect to an Amazon star is about 0.75. His statistical models also found that the aggregate effect of Amazon star ratings is approximately 10 times larger than the effect of New York Times reviews. That’s not necessarily surprising, given that the millions of books with star ratings on Amazon dwarfs the 2,000 or so titles the Times reviews each year.

“There are a couple of takeaways here,” Waldfogel explains. “One is that professional reviews remain relevant. People still look to them as a way to find new books—the sales figures back that up. Another takeaway involves the power of crowd-based ratings. They function as a form of free advertising. And that can help some books—including self-published ones— find success. What’s more, the authors often can find that success without traditional forms of intermediary help such as professional marketing, distribution, and the like.

“There’s a huge amount of content—music, books, and more— being developed outside of traditional channels,” he adds. “The vast majority of them won’t find a mass audience, but thanks to the democratizing effects of digitization, they now account for a substantial amount of overall sales.”

“Digitization and Pre-Purchase Information: The Causal and Welfare Impacts of Reviews and Crowd Ratings”
Reimers, I., and Waldfogel, J., American Economic Review, (2021)