Amazon’s Recruiting Gets an Alumni Assist

It wasn’t all that long ago that a Carlson School MBA student interacting with Amazon was a rarity.

The company came to Minneapolis to recruit from the school’s Master of Arts in Human Resources & Industrial Relations Program, but didn’t heavily recruit MBAs. That’s no longer the case, thanks in large part to Dan Jedda, ’99 MBA and Amazon’s vice president of finance for digital, advertising, and corporate development.

Amazon was named the Graduate Business Career Center’s 2017 Recruiter of the Year in recognition of its work with Carlson MBA students. Seven first-year MBA students interned at Amazon over the summer, while two graduates accepted job offers.

“A lot of that is due to Dan. He really made an effort in bringing his recruiting team out here to engage with our students, prep our students, get our students to think like Amazon, because they’ve got this very unique way of interviewing and assessing talent,” says Maggie Tomas, director of the Graduate Business Career Center.

Jedda had already begun to push his team to build inroads to the Carlson MBA Program, but he calls the 2014 launch of the Master of Science in Business Analytics (MSBA) Program “the catalyst that got me even more involved.”

He sees the program’s combination of in-depth training in analytical methods and underpinning of business fundamentals as increasingly valuable, particularly in the tech industry, as analytics continue to play a larger role in driving decisions and strategies.

“Not only is the whole of corporate America going to move to that, but tech is going to lead in that initiative, and Amazon already is,” says Jedda, who joined fellow Part-Time MBA Program alumnus Nic Reichenbach, ’11 MBA, for sessions with students from the MBA and MSBA programs during a visit to campus in September.

Tomas says there is growing interest in the technology sector among students, which makes Amazon an appealing employer. She also sees a nice alignment between Carlson students’ “Midwest work ethic” and Amazon’s culture, as well as similarities between Minneapolis and Seattle.

“Amazon is changing the way business is done,” Tomas says, “so that is appealing to any business student.” 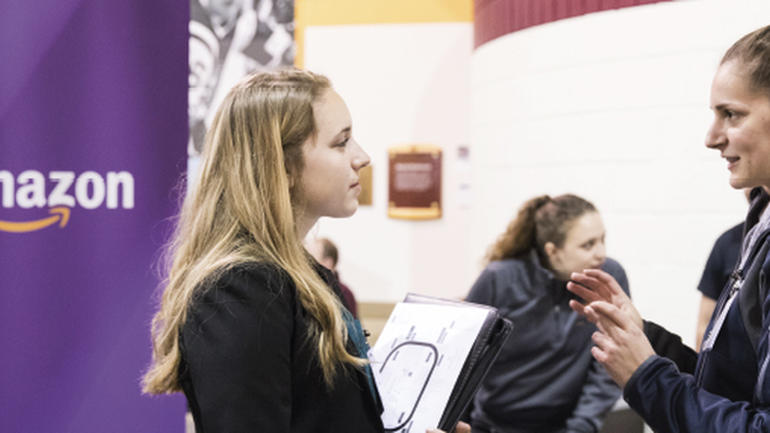