A World of Experience

By the time Diana Amima arrived at the Carlson School, she had two things many of her fellow undergraduate students did not: a college degree and several years of professional experience as a wine import specialist from her home country of Kenya.

Amima, who was born and raised in Kenya, dreamed of moving to the United States, where she intended to further her education in supply chain management and secure a better life for her daughter. While she initially thought she wanted to live on the East Coast, Amima found someone in Minnesota who was willing to host her and her daughter. That’s when she set her sights on the Carlson School of Management.

All undergraduates at the Carlson School must complete an international experience to graduate. Exposure to different ideas and cultures is essential in a globalized business environment.

But the school also benefits from the rich experiences of its international students. In the 2019-2020 academic year, the Carlson School had 463 international students combined in undergraduate and graduate programs, arriving from approximately three dozen different countries. While they’re at Carlson School to learn, they also contribute new perspectives to students who may have spent their whole lives in the Twin Cities.

“The Carlson School is enriched by the presence and contributions of our international student population,” says Michael Houston, the Ecolab-Pierson M. Grieve Chair in International Marketing, and former associate dean of Global Initiatives. “They bring their unique cultures and fresh ideas, as well as invigorate Minnesota’s economy.”

Amima faced a number of hurdles as she transitioned from Kenya to Minnesota, starting with her transcript.

“An advisor who understood international transcripts told me that the credits from the university I went to in Kenya wouldn’t transfer over,” she says. “It was frustrating to hear that.”

Amima also had bills to pay and a child to support, so she needed a job. She found herself working full time while earning her associate degree from St. Paul College on nights and weekends. After two years, she had two options: Apply to the Carlson School—where she had attended multiple information sessions and dreamed of going—or go to another four-year college where she’d have a more flexible schedule, allowing her to work full time.

“I knew I had to choose the Carlson School, because it had a great reputation and the support I received from alumni was amazing,” Amima says. “I could’ve gone elsewhere, but I wanted more than just any four-year college degree.
That made any trade-offs worth it.”

Amima says it’s been an incredibly difficult, and rewarding, experience. She struggled right off the bat with intense courses in the school’s I-CORE curriculum, though she found solidarity with recent grads who assured her it wasn’t just her—and that it would get better. It did, Amima says, and she found that in many courses, she was able to add new perspectives by referencing her extensive work experience outside the United States.

“During group projects, I think I’m able to nudge people to think about how business is different outside of America,” she says. “What works here doesn’t always work elsewhere. But not everyone realizes that.”

During a discussion about employee performance reviews, for example, she noticed they were conducted very differently in Kenya.

“In America, the reviews often seem to focus on the positive as a way to motivate people. But in Kenya, they really focus on the negative to push you. If you didn’t know that, it could be a problem working for a company that has employees all around the world.”

“Every time I meet with Diana, I learn something new,” says Laura Rasmussen, an undergraduate academic advisor who has worked closely with Amima. “She embodies what it means to be a Carlson School student, and I am so grateful she chose to attend this school.”

Lucas Bagno, ’19 BSB, says it was “part planning, part serendipity” that he ended up at the Carlson School.

Growing up in Brazil, he always knew he wanted to attend a university in the United States. But a year before he was supposed to go to college, an economic crisis hit Brazil and his parents lost everything—they wouldn’t be able to help him attend school. But Bagno says he wasn’t going to quit on his dream. He applied to a number of business schools in the U.S. and was accepted to the University of Minnesota with a scholarship that made it possible for him to attend.

How you grow up shapes you and the conversations you have. We'd be talking in class about free enterprise or private property rights in a very theoretical way—but these are real issues in Brazil.

Going to school in Minnesota meant being surrounded by a language different than his first language, learning a new culture, and not having the comfort of a Brazilian diaspora here. And that’s to say nothing of the weather, which was radically different from back home. But Bagno saw all of it as a benefit—something that made attending here more enticing.

“I wanted to go somewhere I could immerse myself in a totally new environment,” he says. “The weather was definitely part of that. I had never seen snow before I arrived. It was very, very different. It was perfect.”

Bagno quickly found that his cultural differences set him apart in a positive way.

“How you grow up shapes you. And if something shapes you, it shapes the conversations you have. We’d be talking in class about free enterprise or private property rights in a very theoretical way—but these are real issues in Brazil.”

He went public with some of his thoughts early in his freshman year when he penned an article on what he thought was wrong with Brazil and its economy. It was featured on Business Insider and the Mises Institute website, a libertarian think tank. Bagno proudly shared it during a meeting of international students with John Stavig, director of the Gary S. Holmes Center for Entrepreneurship, who was immediately intrigued and remains a mentor to Bagno to this day.

“It was clear that even in his freshman year, Lucas was a mature student,” Stavig says. “He is one of the most engaging students I’ve ever met, and is genuinely interested in asking questions and learning about others and their perspectives.”

It was through Stavig that Bagno’s most-lasting legacy on the University of Minnesota campus emerged, when Stavig invited him to join a group of students to launch Atland Ventures, a student-run venture capital fund.

Stavig approached Bagno at a time when he was pulling himself in every direction academically. Even so, working on the Atland project, which sometimes involved 60 to 80 hours of work a week, appeared to bring a renewed focus.

“Once he became involved in Atland Ventures, he was able to focus his efforts and achieve remarkable results,” Stavig says. “I’m constantly running into alumni who are blown away by his work at Atland.”

Bagno’s journey to America—one that nearly didn’t even happen—has paid off handsomely. Today, he works in Silicon Valley in a management consulting job.

For some, international perspectives are shaped by a person’s time growing up outside the United States. For others, it’s through worldly service in the military or Peace Corps. For Young Ma, ’21 BSB (expected), it’s both.

Ma was born in South Korea and by age 11 says he knew he wanted to explore the world, owing in part to a trip to Canada at that time.

We live in a time where basically everybody on Earth is connected. Embedding myself into different cultures, and letting those experiences give me a global worldview, is essential to becoming successful. 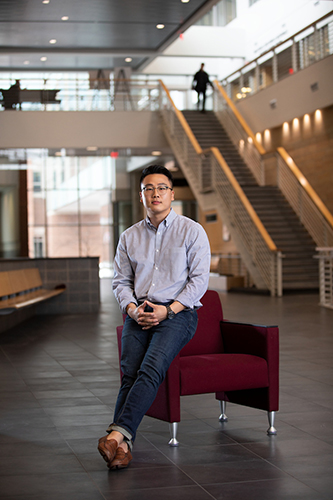 At age 14, he moved—by himself—to Boston to attend high school. Upon graduation, he earned a scholarship to the Carlson School.

But by his sophomore year, his family was no longer able to provide financial support that would allow him to continue his studies. In order to keep his American Dream alive, Ma enlisted and served as an active duty member of the United States Army as a patient administration specialist—a job that involved maintaining patient information and medical records, tracking and coding them, and conducting admissions and dispositions. Four years later, he came back to the Carlson School, now as an American citizen, ready to pursue a career in marketing, and with a service mindset.

“My time in the military taught me that serving others makes me happiest,” Ma says. “It pushes me to move forward in my life.”

The military taught him how to work with people who had different backgrounds, ethnicities, religions, family structures, and cultures. “Learning how to listen, execute and accomplish missions with people of different ‘past footsteps’ helped me become a more mature and collaborative person,” he says.

He says he believes growing up in another country, traveling the world, studying in the United States, and his time in the military all contribute to someone who is better prepared for a career in business.

“I always tell my friends here in Carlson to get out of their comfort zone and explore,” he explains. “We live in a time where basically everybody on Earth is connected. Embedding myself into different cultures, and letting those experiences give me a global worldview, is essential to becoming successful.”

This summer, Ma takes his next step toward his goal of becoming a business leader—as a marketing intern at Ecolab.

Home Away From Home

The benefits that the Carlson School’s international students bring here don’t end when students graduate. Many decide to settle here, whether for a while or for life.

When Diana Amima graduates, she isn’t heading back to Kenya. Instead, she’s already accepted a full-time job at Target’s corporate office, where she’ll be an inventory analyst. She’s hoping to grow within the company and eventually land a role in quality control.

She’s made a life here that she isn’t ready to give up. Even with the cold weather.

“Every winter I tell myself I’m moving,” Amima says. “But I don’t think I ever will.”

How very Minnesotan of her.