Questions & Entrepreneurs, or Q&E, features entrepreneurial Carlson School alumni, students, faculty, staff, and friends. They will share successes, challenges, and insights about their journey of bringing ideas to reality, whether through new companies, new ways of thinking, or solving new problems.

Ever since participating in the inaugural “Entrepreneurship in Action” class at the Carlson School, musician and producer Phil Thompson, ’07 BSB, has valued the collaborative spirit of a team working towards a common goal. Combined with his love of creating theatrical music videos in spectacular settings, that affinity inspired him to join the Greater Twin Cities Youth Symphonies (GTCYS) and the Immersive Van Gogh Exhibit Minneapolis on a tribute video celebrating the GTCYS’s 50th anniversary. 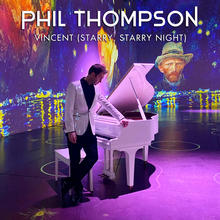 Thompson is the founder of Phil Thompson Productions, a composer, television host, philanthropist, and Kawai-endorsed international touring artist. In February 2022, he released on YouTube an acoustic arrangement of Don McLean’s “Vincent (Starry, Starry Night).” The project features a group of top high school orchestra students from GTCYS and his piano accompaniment against the backdrop of the Immersive Van Gogh Exhibit’s floor-to-ceiling scrolling projections of artist Vincent Van Gogh’s paintings.

Thompson recently spoke to the Carlson School about the video production, how his degree helped him blend his musical and business ambitions, how entrepreneurship and entertainment combine, and how important it is for him to uplift communities with music.

What inspired the creation of this video and your collaboration with GTCYS?

I love creating “larger than life” music videos—from one set in the ice castles in Stillwater to another on the cliffs of Malibu. I think of them as soundtracks to the scenery, with the music and setting complementing each other. When I learned the Van Gogh exhibit would be in Minneapolis, I wondered what music would provide a great sound with it, and I have always wanted to collaborate with an orchestra.  It all came together when I learned the youth orchestra is celebrating their 50th anniversary. I liked the idea of working with youth and including them in the whole process from beginning to end. “Starry, Starry Night” just accompanies the exhibit so well, and then I learned it is also the song’s 50th anniversary, so it was “meant to be.”

What did coordinating this project mean for you at this time?

The 50th anniversary of the Youth Symphonies is the perfect time to celebrate youth, music education, and put out a positive message to the Twin Cities after the difficult last few years. Musicians have a long history of giving back through music, from the aftermath of hurricanes and other natural disasters to 9/11 and other major world events, so it is ingrained in me to turn to music to touch people and lift spirits in times of need. I’ve worked to build up artists in the Twin Cities and provide for the community through charitable events. There’s an incredible history of music makers in Minneapolis and the collaborative spirit is very much alive here.

How did you translate your business degree in to a career in music and music production?

I started my first web site for my business while I was still in school. I believe there’s a perfect relationship between business and music, but I had to apply the skills I learned about being an entrepreneur, and about sales and marketing. So many musicians want to focus music only. I knew I had to think creatively about where could I find homes for my music, such as private performances for the business world, corporate events and the like, then plan and sell my ideas. I had to show I could solve problems for others with musical entertainment to make it a sustainable career. I’ve performed around the world at company outings, professional golf and tennis tournaments, in Las Vegas, in addition other more solo endeavors. Some local events for Minnesota companies where I’ve entertained some of my old classmates have been fun and rewarding.

What advice do you have for aspiring entrepreneurs at the Carlson School?

Start your business while you are there. Use the time at Carlson to find what works while in the safety and relative security of the environment, when you can lean on professors and bounce ideas off of them. Develop your ability to sell, to really create turnkey solutions to problems. Love sales and marketing!