Aaron Sojourner isn’t scared off by complex economic issues. In fact, he leans into them. In the process, he’s working toward an economy in which everyone can flourish.

Aaron Sojourner isn’t scared off by complex economic issues. In fact, he leans into them. In the process, he’s working toward an economy in which everyone can flourish.

It was U.S. President Harry Truman who famously asked to be sent a one-handed economist, one who couldn’t say “on the one hand…but then on the other hand.”

“I’m a many-handed economist,” says Sojourner, an associate professor in the Carlson School’s Department of Work and Organizations. “I see a lot of alternative explanations for things.”

It’s precisely this ability that led Sojourner to a career in labor economics. And, perhaps, among the traits that have allowed him to focus on a broad range of issues—from COVID-19 screening practices in the workplace to forecasting joblessness using Google Trends data to research on the challenges around access to quality childcare.

“Everything I work on is basically about how we create a society and an economy where everybody is flourishing, is productive, has a place that they can contribute, and have their time and skills valued,” says Sojourner.

“I see a lot of alternative explanations for things.”

From Organizer to Economist

Sojourner comes from a family of boots-on-the-ground activists. His parents, Henry and Sue, took the liberation name Sojourner in the 1970s to fight the patriarchy and honor abolitionist Sojourner Truth. Both elder Sojourners worked to support Mississippi’s civil rights movement in the ’60s. And Sue, who passed away in 2020, spent her life advocating for civil rights, LGBTQ rights, women’s rights, and equality for all.

“Growing up, I was very aware of the idea that people can organize and try to change the rules of the community and the rules of society and how things work,” Sojourner says.

After earning an undergraduate degree in history, Sojourner followed in his parents’ footsteps and began working as an organizer. He spent five years with the carpenter’s union learning about the labor market from the vantage point of construction workers.

Sojourner went on to do policy and lobbying work for the unions, but eventually hit a wall.

“I got burned out,” he explains. “I wanted to understand more. We were pushing for this stuff [and] I knew it was good for our members, but I didn’t know how to think about the impact it was having more broadly. … I felt like I didn’t have a great framework for thinking through it all.”

The thirst for understanding led him to a master’s program in public policy at the University of Chicago. “That was really the first time I studied economics. I fell into a very intense love/hate relationship with economics there.”

Sojourner recalls that he’d read economic research articles and the introductions were always compelling, but, by the end, the conclusions seemed to contradict his lived experience as a union organizer.

“I would read the middle of the paper and it was all Greek—I had no idea what was happening. … It was very intellectually unmooring. I didn’t know how to put these pieces together. I realized I really needed to understand that middle part of the paper.”

Sojourner went on to earn a Ph.D. in economics from Northwestern University and joined the Carlson School in 2009.

Now, not only does he understand, he also writes the middle parts of papers on complex economic issues. Of course, being the multi-handed economist that he is, Sojourner isn’t content living in the theoretical.

“One thing I appreciate about Aaron is that in a lot of his research he’s tackling these very applied real-world problems,” says Mary Zellmer-Bruhn, professor of organizational behavior and chair of the Department of Work and Organizations.

“Everything I work on is basically about how we create a society and an economy where everybody is flourishing, is productive, has a place that they can contribute, and have their time and skills valued.” 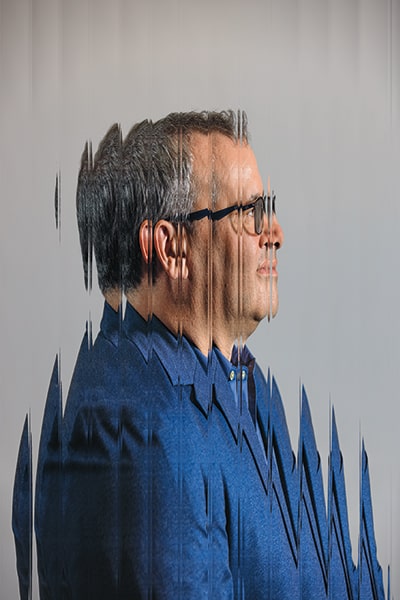 “He made some points that I thought were pretty compelling about why… just leaving families alone to make choices won’t lead to the best outcome and why there’s a strong justification for public investment and public policy to be involved,” he says.

Around the same time, Sojourner and his wife welcomed their first child.

“That made some of those writings [land] differently, being a new parent and trying to balance a lot of the tradeoffs that young families have to face.”

Sojourner’s curriculum vitae reflects his continued commitment to understanding the economics behind early childhood care and education. Last spring, the Hamilton Project—an economic policy initiative within the Brookings Institute—approached Sojourner and Elizabeth Davis, a University of Minnesota professor of applied economics, to write a proposal to increase federal investment in early childhood education.

“It was different in that the Hamilton Project wanted us to make as specific a recommendation as we could,” says Davis. “They pushed us to basically put a stake in the ground and say what we would recommend at this point in time, given what we know and what we don’t know.”

Sojourner and Davis laid out the problem first: How can we ensure every American family and child has access to high-quality, affordable early childhood care and education?

The solution, naturally, is complex.

“We have this weird policy arrangement [in the U.S.] where we spend [something] like $13,000 per child per year between age five and 17,” Sojourner says. “But in the first five years, when kids need more attention, we actually invest only [about] a ninth of that per child per year. This is asking the most of families when their kids are young…when they have the least.”

Both researchers say our current system creates a heavy burden on parents of young children who either need to leave the workforce to care for their children, pay prohibitively high rates for quality care, or settle for less-than-ideal care options that are more affordable.

“Once your kids hit kindergarten, the K-12 system takes a big part of that care responsibility off your plate, but for those first five years, your hours are really scarce,” he says. “That’s really challenging. It really causes an investment shortage especially in young children, especially children from more disadvantaged families. We’re missing out on getting the returns. We’re baking in inequality and baking in lost productivity and lost capacity. To me, it’s really tragic.”

As the COVID-19 pandemic continues to expose, we have a deep care crisis in this country. On the one hand, care workers experience high turnover and low wages. On the other hand, care is often scarce and prohibitively expensive for families. This is where a multi-handed economist comes in—ahem—handy. Sojourner, who is a go-to expert for international, national, and local media on this topic and others, sees room for optimism amid a multitude of challenges.

The middle part of Sojourner’s and Davis’ Hamilton Project proposal lays out how to best structure an investment into early childhood care, how to ensure struggling families have access to quality care at affordable rates, and how to compensate care labor in a way that draws out quality care and lowers turnover. They also address how to build a system that is dynamic and that can adjust and adapt as the economy changes.

The paper concludes: “Through this major expansion in public funding, children in the United States will have a better chance at equal and equitable opportunities so that their success is not heavily influenced by where they live, their parents’ incomes, and their race and ethnicity.”

And that, according to Sojourner, really is at the heart of his work as a labor economist—and as a person who has seen firsthand the power of organizing ideas into action.

“I absorbed from [my parents] the idea that the dignity and the self-determination of everyday people, of everyone in the community matters, and that we should work to build communities where people can live the lives they want to live,” he says. “I want to live in a community, a country where everybody can be productive and have their contributions valued and they can flourish.”

This article appeared in the Fall 2021 alumni magazine

Our world, our lives, and our work have changed. We must continue to adapt.

So, how do we do that? Where do we go from here? What’s next?