It’s not often a vice president at a global corporation turns to a group of undergraduate students for advice on a potential major technology upgrade.

But that’s precisely the situation that played out last month at the Carlson School in Information & Decision Sciences 3202 through a revamped case competition in partnership with Boston Scientific (BSC).

The 120 students in Assistant Professor Sofia Bapna’s course had 2½ minutes to hook the judges—think the reality show Shark Tank—on their proposals for adopting blockchain technology at the Fortune 500 medical device company.

And their reward for a successful pitch? Fielding some tough—and specific—questions face-to-face and off the cuff from the judges, who included two VPs and two directors from BSC, along with senior information technology leaders from General Mills and Blue Cross and Blue Shield of Minnesota.

“We had broad business value (in our presentation), and that’s what you kind of learn in a textbook. You learn the big, broad value, but they’re looking for specific little bits and pieces,” said Mitchell Wanous, a junior majoring in Finance and Management Information Systems (MIS). “Getting questions like that, where it was, ‘How can we actually implement this in Boston Scientific?’ ‘Where’s the specifics on it?’ was just a little bit different perspective. 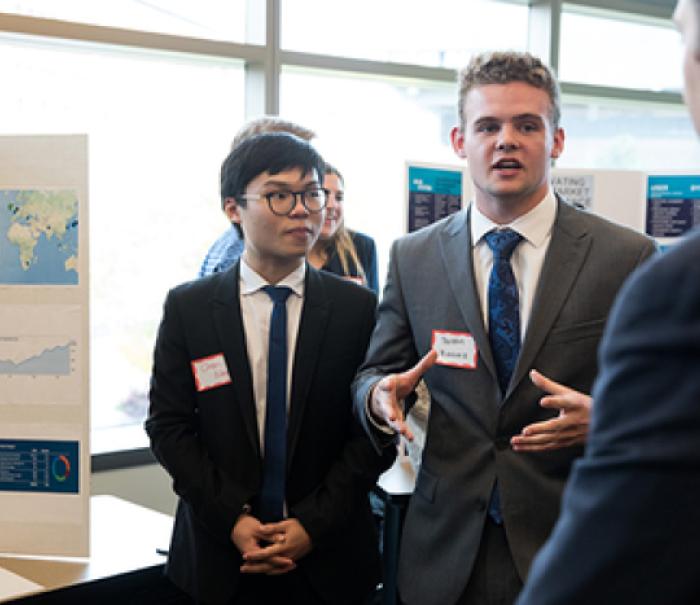 “They were actually trying to learn something from us. You could tell, the questions were tailored where they were trying to get us to give them more information so they could learn about it.”

That’s precisely why BSC chose blockchain as this year’s topic, according to Ben Amel, ‘12 MBA and the company’s vice president of information technology sell and support. Blockchain, which essentially creates global, secure, constantly updated records ledgers, has been touted as a transformational technology for the healthcare industry.

“We truly are interested in this technology. We’re trying to figure out where we would apply it, what value it would add to our company,” Amel said. “I really felt like this blockchain area, in particular, was an area where the students could really add a perspective that we maybe aren’t thinking about.”

The undergrads spent two weeks researching BSC and blockchain, including meeting with Spencer Price, ’15 BSB and a business systems analyst at BSC who helped write the case. Unlike previous years in a competition that’s been running for the better part of a decade, though, every team got the chance to present its proposal. Previously, only the top four groups (as judged by the instructor) were afforded that opportunity.

But, with IDSC 3202 being a required core course for students pursuing an MIS major or minor and growing interest leading to surging enrollment, “it was kind of time for things to change,” said Bapna. The new format allowed students to showcase a wide range of areas that could be enhanced by blockchain, including internet of things devices, clinical trials, inventory management, and telemedicine.

"I really felt like this blockchain area, in particular, was an area where the students could really add a perspective that we maybe aren’t thinking about."

Bapna said exposure to leading-edge technology like blockchain will prove valuable for students as they start their careers. She referenced a student from last year’s case, which explored radio-frequency identification; last summer, the student’s internship included a project using that same technology.

“When they graduate and land their first jobs, they are likely to find that most businesses are thinking about how to use blockchain. These students will have an understanding of blockchain going in,” said Bapna. “They’ve tried to solve a real business problem using this technology. It’s not new to them.”

Price, who studied MIS and public and nonprofit management at the Carlson School, could relate, having been in the students’ shoes four years ago. He called the course “the business analyst toolkit. It’s the bread and butter of an MIS professional.” His case experience, which inspired him to join the MIS Case Competition Team, involved knowledge sharing, management, and collaboration tools. He’s now part of the team rolling out Office 365 at BSC.

“Who knows? Maybe someone from the class will be in my shoes four or five years down the road,” he said, “and we’ll be doing a full-on application of blockchain and they can be a part of that.”