Landing on His Feet

Favorite part about Carlson: “I love the people. I think it’s so fascinating to meet all these students and hear their stories and where they’ve come from. You get to know people on such a different level. I like the community here.”

Lessons that cut across skating and school: “If you want to be good at something, you have to really commit to it.”

Favorite faculty: “John Molloy. He has such a dry sense of humor, but he definitely cares about the students and you can tell he’s super invested in making sure they understand the concepts. And Rand Park. He has a good way of connecting relevant class material with real-world situations.”

Favorite skater to watch: “That’s a tough one. Honestly, Michelle Kwan. She’s an icon. She’s just so incredible, and also what’s so fascinating about her is she did so well in skating and now she’s pursued a completely different path.”

Favorite song to skate to: “There’s two: I skated to ‘In Your Eyes’ by Peter Gabriel and I loved it, and also ‘Eleanor Rigby’ by the Beatles, just because it was kind of my breakthrough performance when I finished seventh at nationals and started to make my name in the senior ranks.”

As the anesthesia faded and Alex Johnson returned to consciousness in a hospital room in Colorado Springs, Colorado, he couldn’t feel the toes in his right foot.

That wasn’t unexpected—the 23-year-old American figure skater had just undergone surgery to repair three torn ligaments in the ankle he’d shredded while landing a triple axel in practice during the summer of 2013. The injury didn’t just hurt physically—it dashed his hopes of competing for a spot on the following year’s Olympic team.

But when the numbness persisted in parts of his foot days and then weeks later, and tests revealed nerve damage, those spoiled Olympic dreams paled in comparison to the question he and his medical team were discussing: Would he even be able to walk normally again?

In those angst-filled days—three years before the Minnetonka, Minnesota, native returned to the Twin Cities to start school at the Carlson School of Management—he navigated a delicate mental balancing act.

On one hand, he realized it was time to plan for life after skating. And yet, while grinding through nine months of up-and-down rehab, he resolved to push through the words of caution from his doctors, his struggles to balance on his right foot, and anything else and return to competition.

“I was definitely discouraged by the results I was getting and by what everybody else was saying,” he says. “But there was something inside of me that knew I can overcome a lot of the things, and I also just really love skating and didn’t want to give that up.

“I was like, ‘No matter what, I’m going to keep trying.’ And I’m really happy that I did.”

Johnson is now a 27-year-old Finance major at the Carlson School who’s set to intern as an investment banking analyst at Lazard Middle Market in Minneapolis this summer before graduating in December.

And while he won’t be skating in South Korea at next month’s Winter Olympics, he has re-established himself among the top tier of American male figure skaters while also embarking on the next phase of his life.

Back in 2013, a seventh-place showing at nationals prompted U.S. Figure Skating to identify him as a potential candidate for the 2014 Olympic team. But five months later, his landing ankle gave way. At first, he was in denial. He put off an MRI and tried to skate, telling himself his ankle was feeling better and that he could still try to qualify for the Sochi Games.

Deep down, though, he knew it was a lie.

He underwent surgery in July 2013. Then came the unexpected complications.

“That was kind of a moment where I thought, ‘I’ve put everything into skating, but I also need to start pursuing other things,’” says Johnson, who still sometimes struggles to balance on his right foot and doesn’t have full feeling in part of that leg.

“School has always been in the back of my mind, because I feel like an education is so valuable, regardless of what you do. But that was definitely one of those times where I was like, ‘If I’m never skating again, I need to have something else to fall back on.’” 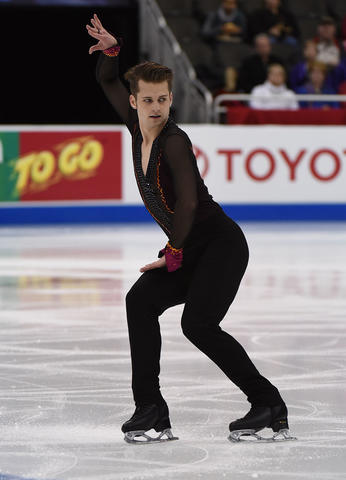 Johnson actually enrolled at the University of Minnesota back in 2008, before realizing that pursuing an engineering degree while competing internationally on the junior figure skating circuit was not sustainable. He moved out to Colorado Springs to focus exclusively on skating, though he still took enough online classes through the University and Normandale Community College to earn his associate’s degree.

But after rehabbing, struggling through a difficult first season back, and finding his stride again on the ice, he wanted to come home. And he was interested in a business degree, with an eye on a career in finance.

“I hadn’t been in class, taking a full course load, since high school,” he says of his first semester back, when he took six courses while also training for the U.S. Championships. “It was pretty overwhelming, but I enjoyed it. I met some really cool people—even though they’re like seven years younger than me.”

Johnson’s schedule is also a bit different than those of his classmates. Each day is packed with classes, training at Parade Ice Garden, off-ice workouts, teaching private lessons, and studying. He spends many weekends on the road, either performing in shows or competing—he was in Croatia the week before finals last fall, after placing second at the Nebelhorn Trophy in Germany in September.

Then there are periodic visits to Colorado to work with his choreographer. And, of course, meeting for group projects, preparing for presentations, and completing assignments like any other undergrad.

“It’s definitely made me enjoy skating events more,” he says. “I can’t obsess.”

Johnson now looks back at his fateful injury and says, “the Olympics would be amazing, but it’s definitely not everything.”

“I can’t define my character by that one event. I have had so many wonderful victories in skating, but it’s the life lessons that matter. Those will help me succeed wherever life takes me.”