Crafting a curriculum that emphasizes international experiences was a bold initiative for the Carlson School. But it was just the beginning. The school has not rested in its pursuit of enhancing both business and cultural learning for all its students.

The concept of CQ was pioneered by Soon Ang, ’93 PhD and recipient of the University of Minnesota’s Distinguished Leadership Award for Internationals. Ang is the leading authority in CQ and has coauthored two foundational books on the topic (published by Stanford University Press). She is currently the Distinguished University Professor in management at the Nanyang Business School, Nanyang Technological University in Singapore. Based on the science of intelligence, CQ comprises four factors: 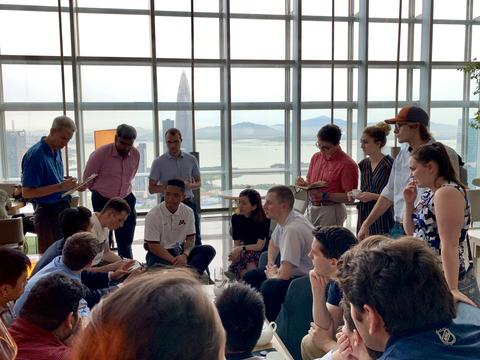 As people develop their CQ, they become more adept at functioning in a culturally diverse environment, Ang says. Today, more than 150,000 people across 168 countries have taken the CQ test.

“I’m amazed at how fast CQ has moved since we first developed it,” Ang says. “There’s a real need to advance this research and lead new breakthroughs to help people and organizations develop their cultural intelligence.”

A person’s CQ is measured on a spectrum and is constantly growing and changing. Developing this capability is extremely important as students enter the workforce.

CGI is developing ways in which CQ can be used in classrooms, specifically with orientation programming in MBA, Masters in Human Resources and Industrial Relations (MHRIR), and short-term education abroad programs. CGI also is responding to interest by faculty and staff across the school and the University on the CQ model.

One of the most robust examples of using CQ in the classroom is in the MHRIR program. Students in the program take an individual CQ assessment during orientation. Results of the CQ assessment are used throughout the program, including the six practicum sessions in the first year when students are exploring real-world business problems, several of them with intercultural themes.

Following the program, the students take a 360-degree assessment to measure how they have changed over time.

"Students in the MHRIR program are able to take the skills and perspectives they've learned in the CGI program out to the organizations where they work,” notes Professor John Kammeyer-Mueller. “Their experiences help them address some of the increasing need to effectively manage culturally diverse workforces. It's especially important for contemporary HR leaders to implement rigorously developed and well-structured systems for enhancing CQ in the workplace, and CGI's program is exactly this type of model. In sum, our students learn both the elements of CQ and also gain experience with developing CQ in others."

Clayton Forester, senior lecturer and program director for the Master of Arts in Accountancy, began using the CQ assessment this past fall for his “Managerial Accounting—An International Perspective” course that takes place in both Argentina and Chile. The assessment asks students questions about how they behave and think in certain intercultural settings and situations.

Throughout the course, Forester says he wanted his students to be aware of cultural components and he used the CQ framework to weave those ideas more seamlessly into the course to allow students to explore the interaction of these cultural dimensions in a business setting.

“I think it’s really important for everybody to understand how a person’s culture shapes their worldview,” Forester says. “That affects not only the workplace, but the different perspectives and ideas each one of us brings to the table.”

Exploring CQ Across the University

The Carlson School has taken the lead on using CQ to enhance student learning and faculty teaching, but the concept’s presence at the University could be expanding as well.

Michael Goh, vice president for equity and diversity, says he likes the CQ model and would like to see it used widely across campus. The University is in the very early stages of exploring this and how it might be rolled out in the future.

Goh sees the Carlson School and the University as having a chance to be leaders on this topic across U.S. higher education institutions. As of now, he and his team are in a process of discovery and exploration, and looking at ways to train staff on CQ and implement CQ interventions.

Each and every day, everyone across campus is having inherently intercultural interactions, whether it's in a classroom or at work. CQ can bring clarity and context to those everyday situations.