Throughout his life, Carlson School undergraduate student Ryan Rogers has sought out opportunities to connect back to his family’s heritage. Whether that’s studying in Japan or honoring his family with a speech about their history, it all brings him closer to his roots.

Rogers recently won first prize at the third annual Heritage Japanese Language Speech Contest. His speech, titled “My Parents,” focuses on how he and his family ended up where they are now and why he chose to study Japanese.

Hosted by the Consulate-General of Japan each year in Chicago, the competition invites students from 10 Midwestern states to deliver their speeches in Japanese to a panel.

Rogers, who studies supply chain operations and international business, took some time some to talk to the Carlson School about the contest, studying at the University, and his time spent abroad.

Can you tell us a little bit about the Heritage Japanese Language Speech Contest that you took first place in? What is it and why did you decide to enter?

Originally I had applied to compete in the Japanese Language Speech contest last year which is held each year in March. It is a contest that includes students learning Japanese as a second language from around the Midwest. I decided to enter because I thought it was a good opportunity to gain experience speaking in front of native speakers. Because my mother is Japanese, however, my application was disqualified. One of the judges of the competition ended up calling my professor and explaining the situation saying I should apply again next year for the Heritage Language Speech Contest, which includes “bilingual” students and those with Japanese family. 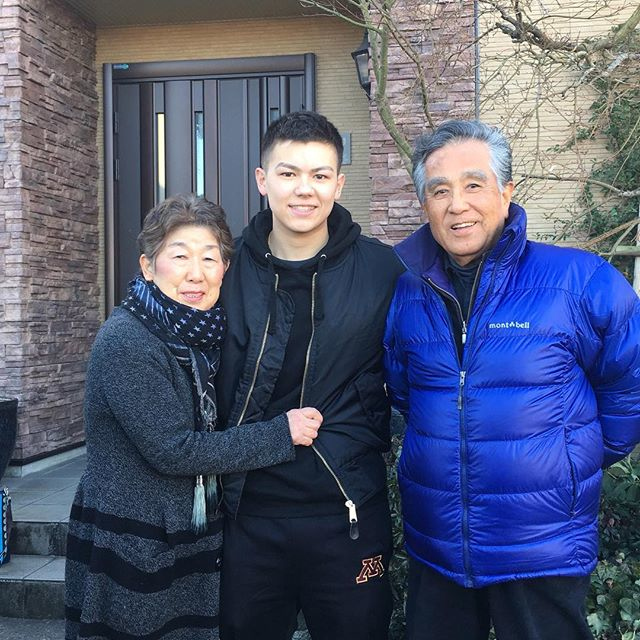 What was your speech about? Why did you want to focus on that for your speech?

My speech was about my parents. The story of how my family and I ended up where we are, along with why I have decided to study Japanese. When I started to write my speech, it was the first idea that came to mind. I felt that it fit well because they are a big part of the reason I am in a position where I can further my education while also pursuing my interest in learning Japanese.

How did you go about preparing for and writing for your speech? Where did you find inspiration?

Looking back, writing it was the easy part. I just told an overview story of my life that focused on how much my mother did for me and my brother when we were growing up. From the time we came to the U.S., I’ve heard the story from my mother’s perspective many times but as I’ve become older I have come to understand the details more thoroughly. I gained a deeper appreciation every time, and realize how fortunate I was.

As for preparation, it just took practice to avoid sounding monotone and as if I was reading. Although when I was on stage, it was easier to sound natural as I mostly went off memory and was talking about a topic I knew a lot about.

What was the feeling like when you won first prize?

It was a great feeling to get that result, not only for myself but as a representative of the U of M. I was nervous heading into the event and when I arrived, I found out almost all the other contestants had 10+ years of Japanese study. Even the youngest contestants in the lower category had me beat on experience. However, ironically, I think this helped me. I went from the mindset of “I have to win” to “Just do what I can.” I was the last contestant to speak and after hearing all the others, I honestly had no thought of receiving the result I did.

Why did you decide to come to the Carlson School?

A large part of my decision came from the requirement for international experience. I have always wanted the opportunity to study in Japan and I felt that at Carlson it would be encouraged rather than something I would have to make space for within my time at college. I also believed that studying business would allow me many opportunities to travel internationally and gain a more global perspective before my future career.

As soon as I decided to go to Carlson, I knew Japan was where I would go to study abroad. I started studying Japanese after entering the U and never really thought about going anywhere else. Growing up, I was able to go to Japan occasionally for about two weeks at a time to visit family, but I always left wondering what it would be like to live there. I saw studying abroad as the perfect opportunity to find that out.

What has your international experience been like so far and how has it impacted you?

It has been great. My internship has been a very useful learning experience and I am continuing to try and make the most of the opportunity. The best thing about being here is that I have been able to connect with my grandparents more than in the past. Because they do not speak English, finally being able to put my thoughts into words in Japanese and communicate with them is something that I am very glad to be able to do. It motivates me to learn the language even more and gives me more to look forward to as I start my study abroad.