Kidwell served as the Carlson School’s 10th dean from 1991 to 2001 and helped shape the school into the leading business school it is today. During his tenure, greater connections between the school and business community were forged, a new building was constructed, and experiential learning and international programs were strengthened. At the time of his retirement, then University of Minnesota President Mark Yudof called Kidwell the “father” of the current school. 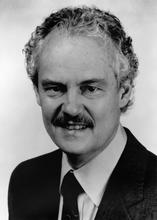 “I’m heartbroken to hear of Dean Kidwell’s passing,” says Dean Sri Zaheer. “When I joined the Carlson School faculty in 1991, David Kidwell was there to welcome me to the school. He was my dean when I got tenure and was promoted to full professor. I owe so much to him, personally. He was a tremendous mentor and leader, and his shoes are difficult to fill. I am so grateful for everything he did to help the school and his memory will live on through all the initiatives he started at the Carlson School that continue to make an impact today."

Upon becoming dean, Kidwell’s immediate efforts were directed at strengthening ties between the Carlson School and the business community. In order to build relationships with the Twin Cities community, Kidwell hosted three dinners a week at his home in his first year as dean. In all, he met with more than 150 local business leaders to share views on business education and strengthen the school’s connection to the local community.

Those relationships would be crucial in 1993 when funds were needed to complete the new Carlson School building. Kidwell was instrumental in finding additional funds for the $45 million structure from 50 different corporations and 20 individual donors. Ground was broken on the building in 1995, and three years later the Carlson School moved to its current location.

In the classroom, Kidwell was influential in helping launch what is now known as the Funds Enterprise. The program, originally known as the Financial Community Partnership Program, was established in early 1998 and launched the Golden Gopher Growth Fund when U.S. Bank invested the first $1 million. This program, positioned to be the bridge between the theory-based academic world and an application-oriented financial industry, became so successful that local companies invested an additional $11 million to start the Carlson Fixed Income Fund in 2003. Today, the Funds Enterprise is one of the largest student-managed portfolios in the country thanks to Kidwell’s ability to build and maintain relationships between academic and business communities.

Before joining the Carlson School, Kidwell was a finance professor and held endowed chairs in banking and finance at Tulane University, the University of Tennessee, and Texas Tech University. He also taught at the Krannert Graduate School of Management before joining the University. An expert in finance, Kidwell published research in many of the leading finance journals and wrote more than 80 articles dealing with the U.S. financial system and capital markets.

A full obituary can be found here. A memorial service is scheduled for 1 p.m. Friday, December 13 at Quiet Waters Park in Annapolis, Maryland.