A Force for Leadership

Attracting top scholars to the Carlson School provides businesses with the highest-caliber professionals ready to step in and apply their skills and knowledge to the challenges of today and of the future.

"The Carlson MBA changed my life and I wouldn’t have had that experience without a scholarship,” says MinhHa Pham, ’11 MBA. “I got to work at some of the most prestigious companies in the world and I became a ‘global citizen’—living and working in different countries across four continents.”

Now living in San Francisco, it was only eight years ago that she was still in her home country of Vietnam making $350 per month. “In a country where GDP per capita was around only $1,000, that was considered a good-paying job,” she says. “My parents, who grew up in the war and then lived through a central-planned economy, didn’t have much savings. Traveling abroad was a huge deal for any of us back then, not to mention to study for an MBA in America.”

That was her dream. Pham knew she wasn’t going to achieve it without some assistance somewhere, so she set her sights on trying to obtain a scholarship of some kind. It took her more than two years to prepare.

The first major item she needed to work on was her English skills. “In Vietnam, back then and even today, English is not commonly used and well taught at schools,” she says. To prepare, she studied the Graduate Management Admission Test (GMAT) intensively for eight months.

The second thing she needed to do was to become proficient at writing application essays. It took Pham nearly 50 drafts to get an application she was satisfied enough with to submit. “A few months later, I got an admission and scholarship letter from Carlson,” she says. “I remember holding that letter in my hand and I just couldn’t be happier.”

Pham was awarded a full tuition scholarship for the Full-Time MBA program. After graduation, she started working as a product manager at Johnson & Johnson under a global leadership program. This program allowed her to work at J&J headquarters in New Jersey for a year and then to move back to Vietnam to manage two medical device product lines. After nearly four years at J&J, she joined Google. Her job there is to help advertisers develop a digital marketing strategy and optimize advertising campaigns using Google products.

As her MBA has broadened her career opportunities, it has also broadened her life in other ways. “I have met amazing people from many countries,” she says. “Including my husband, who is also a University of Minnesota alum. We met at a comedy show in Hong Kong three years ago and it was the Minnesota connection that brought us together.”

What was Pham doing at that comedy show? Well, she also performs stand-up comedy on the side.

“I have performed at seven cities across five countries to audiences of up to 300 people,” she says. “Without the degree in America, I wouldn’t have thought of being able to make jokes in English to strangers.”

Although Pham is now halfway across the continent on the coast, she continues to be a volunteer MBA coach, a role she took on ever since she was admitted to the Carlson School.

“I have helped five people successfully get admission and scholarships to study in America and they have also helped others in a ‘pay it forward’ spirit,” she says. “I deeply believe in education as the most sustainable investment for an individual. One of my dreams is to open a school and a scholarship fund in Vietnam to send students in poor communities to college and to teach them English. I believe they will be critical factors in changing their communities for the better.” Since Pham has made her MBA dream come true, there’s no reason to think this one will be any different.

Thoughts on the Hubers Scholarship 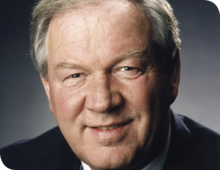 David Hubers, a former CEO, chairman, and president of American Express Financial Advisors, Inc., was a longtime supporter of the Carlson School. He received both a bachelor’s degree in business and an MBA from the University of Minnesota, and his commitment to his alma mater never wavered.

He was one of the founders of the Carlson Funds Enterprise, served as a member of the Emeritus Board of Overseers (EBOO), and acted as an alumnus ambassador. In 1998, he received an Outstanding Lifetime Achievement Award from the University of Minnesota. Hubers passed away in March 2016 at the age of 73.

In addition to his numerous contributions to the school, he and his wife, Shirley, established an endowed scholarship, which has supported many students over the years. Two such students, Evan Dahlseide and Diego Borgert, reflect on that gift and honor.

I chose to attend the Carlson School because of the opportunities that exist after graduating, and the valuable connections that come along with them. Originally, I was going to try and play junior hockey in hopes of earning a college hockey scholarship. After an unfortunate concussion in Boston during tryouts, I did not make the team and decided to enroll at the Carlson School to further my education. I was thrilled to be able to be a part of such a great institution.

Back during the spring, I was asked if I would speak to the Campaign Steering Committee. I was excited to hear about the opportunity and decided it would be a great way to give back. At the Campaign Steering Committee meeting, I told the story about how my father passed away and it was only my mother supporting my brother and I, as well as my difficult financial situation, and how the Hubers Scholarship has made such a difference in my life.

For me, it is essential to give back to the community and school. In the future, I would like to help give back to Carlson by creating a scholarship that helps students with single parents, similar to students like myself. I know how much of a difference scholarships can make in someone’s life, and I would love to help provide opportunities for students in similar situations.

The Hubers Scholarship, from David and Shirley Hubers, was tremendously impactful toward my college experience and my family’s finances. The financial flexibility provided to me served as a foundation to take risks I may not have otherwise been able to take. From studying abroad in China to securing my dream internship in New York my junior summer, each step in my professional journey has arisen from a previous opportunity I had been able to take.

In a bittersweet ending to my time at the University of Minnesota, I had received news that my benefactor, Dave Hubers, had passed away. Reflecting on his generosity, not only to me, but to the entire school, I recalled the last conversation I had with him—it centered on giving back.

Dave instilled in me that those who are able to give—should. We do not truly know how impactful we will be on the lives of others, but we do know that it is our duty to do what we can. Whether in financial contributions, our time, or our guidance, we all have something invaluable to offer. I owe much of my successes to the generosity of our alumni, and look forward to making the same profound impact to our future Gophers in whichever way I can.