Driven: The Campaign for the Carlson School

On September 8, the University of Minnesota launched Driven, its first comprehensive campaign in 18 years, designed to position the U at the forefront of knowledge and innovation. To underscore the goals of the Carlson School, we have themed our Driven campaign “Business as a Force for Good.

In today’s world, when “business” and “good” are used in the same sentence, you tend to hear words and phrases such as sustainability, environmentally friendly, or corporate social responsibility. These are all noble ideals. They are right ideals. Carlson, Cargill, and 3M are three of the largest companies headquartered in Minnesota. Through their foundations and other philanthropic efforts, they have given away millions and millions of dollars over the years. That surely exemplifies business being a force for good.

Huge corporate gifts get lots of press and certainly make the world a better place. But there’s another aspect of business as a force for good that’s so fundamental, it can get overlooked: Carlson employs 175,000 people around the world, Cargill 150,000. That’s more than the entire population of St. Paul. Add in 3M’s 88,000 employees and you are approaching Minneapolis population numbers.

And those are just three businesses. Private business employs more than 86 percent of all Minnesota workers. Their jobs allow them to put food on the table, buy a house, send kids to college, and generally feel good about themselves.

“Business as a force for good is the concept that businesses better lives,” says Dean Sri Zaheer. “It’s about business fundamentally being a positive force in the world because it creates opportunity and employment, it gives people meaning in their daily lives through work, it delivers what customers want and need, it is a great connector of people around the world, and it is an engine of innovation that creates prosperity in our communities, our state, our nation, and our world.”

Carlson School Board of Overseers member Catherine Mathis, ’79 MBA and senior vice president and chief communications officer at McGraw-Hill Education, says she thinks about this every day at her job.

“For us, it really revolves around how to provide products and services for our customers to help students learn better, to help educators teach better, and to provide jobs for our employees that are meaningful and valuable to them.”

The Carlson School is just a small part of this mosaic. We don’t create businesses. What we do is help our students develop their skills and find the opportunities to create their own enterprises or bring their knowledge and stewardship to existing companies. Campaign Co-Chair and Carlson Family Foundation Board Chairwoman Wendy Nelson says her grandfather and the school’s namesake, Curtis Carlson, often credited his life success to the education he received.

“My grandfather said the greatest gift you can give someone is education…and I think the Carlson School does just that,” Nelson says.

“We want students leaving the Carlson School to be entrepreneurial, behave with integrity in all they do, and have a global mindset that enables them to work with people from different backgrounds all over the world,” Zaheer says.

The Carlson School has long championed transformative learning experiences for our students to build these traits. “Such transformational education is best delivered through rich experiences such as live cases, project teamwork with real clients, or global practicums,” Zaheer says.

The Carlson School also has a roster of faculty— many at the top in their fields—who generate cutting-edge research and provide expert consultation services to inspire businesses to be even better. And our facilities serve as both learning environments to meet the needs of today’s students and collaborative spaces for groups to gather and interact. So for our campaign, we’ve identified these four priorities as essential to our mission and our success.

A Force for Leadership

To find the types of leaders in the making who will shape the business landscape in the decades to come, the Carlson School must attract and nurture high-performing and high-potential students, regardless of their financial means.

A Force for Transformation

The Carlson School has long been a pioneer among business schools in creating real-world opportunities for students to learn in the workplace. Support of experiential learning allows students to enrich their educations, discover and pursue their passions, and dig into local and global challenges.

A Force for Innovation

Competition for our faculty is intense, and the growth of new degree programs and our undergraduate population increases demand. To maintain our high standards for educational excellence and continue to support research that addresses genuine business challenges, we must secure and retain high-caliber faculty.

A Force for Engagement

Our vision is to reinvent our existing facilities to benefit students, faculty, and the larger business community. By creating flexible, adaptable spaces, we will leverage the latest teaching techniques, foster project- and team-based learning, and provide students with the technology they will use in the workplace.

“This campaign is all about making a world-class education available and affordable to students, providing them with truly transformative experiences.”

Capital campaigns do not originate in a vacuum. Rather, they are a continuation of previous campaigns, each one of which has allowed schools to grow their quality, programs, and engagement. For the Carlson School, it is worth taking a look back to see how each past campaign has allowed us to move another step forward.

From 1986 to 1988, the Minnesota Campaign’s focus was on recruiting and retaining world-class faculty. Curt Carlson gave $25 million to the school—the largest single gift given to a public university at that time—which resulted in the renaming of the School of Business to the Curtis L. Carlson School of Management. His gift also leveraged more than a dozen additional endowed faculty gifts and increased the total number of endowed positions from three to 27. In total, The Minnesota Campaign raised more than $50 million for faculty support for the school.

The 1991 to 1995 campaign, Transformation, was to create an extraordinary learning environment. Another gift from Curt Carlson— $10 million—helped to fund the school’s flagship building. This resulted in the consolidation of operations from five different buildings and ushered in a new era for how students and faculty collaborate with the business community. The Transformation campaign resulted in more than $20 million in gifts that leveraged an additional $25 million from the state.

Expanding the school’s undergraduate program was the focus of Building on Excellence, which took place from 2004 to 2008. This campaign saw Herbert Hanson, Jr. provide a lead gift to construct a new, 123,000-square-foot undergraduate building, Hanson Hall. More than $12 million also was raised for scholarship support, the majority for undergraduate students from Minnesota. The results of this campaign helped increase undergraduate enrollment at the Carlson School by more than 50 percent. 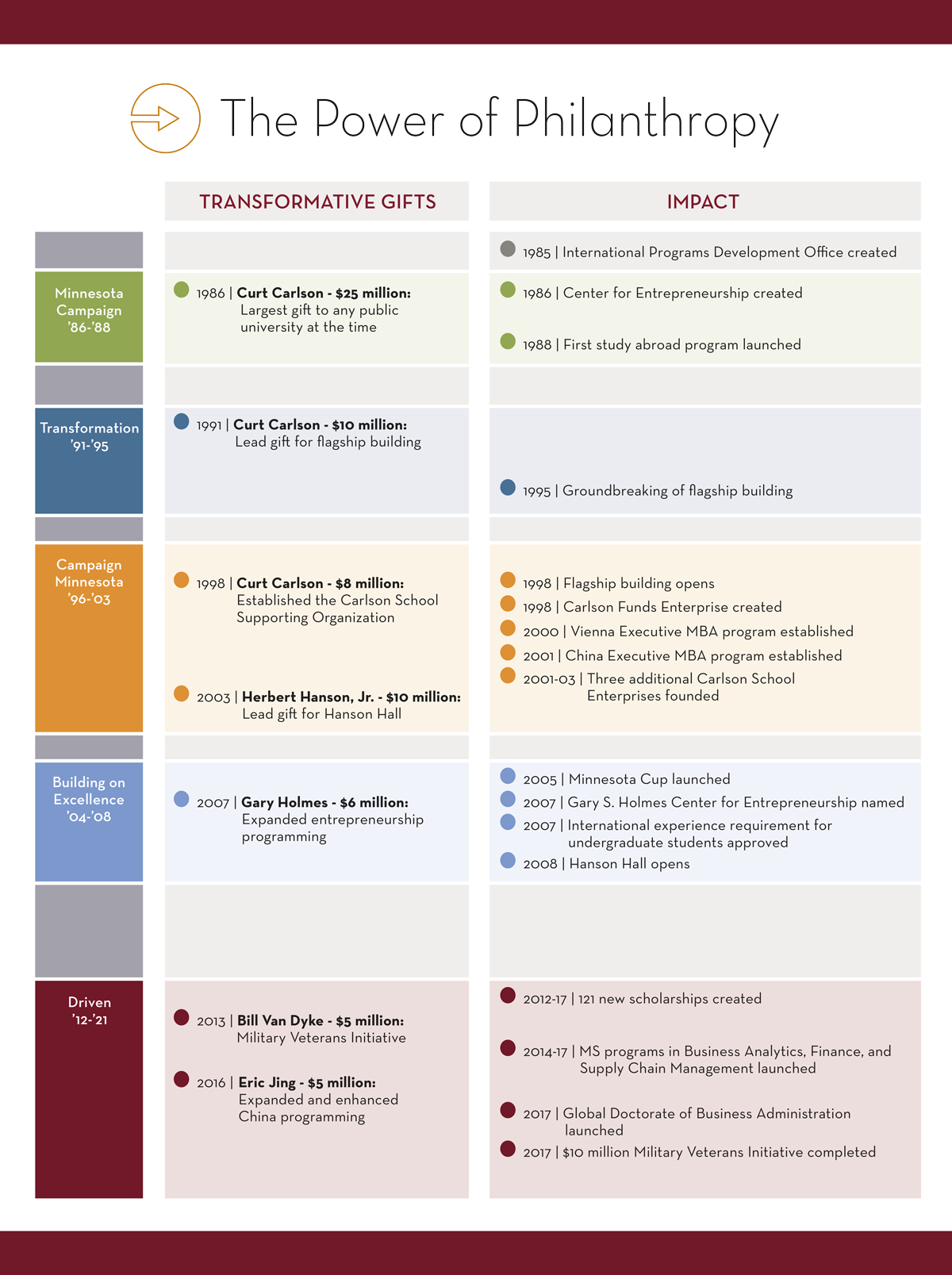