Creating Global E-Commerce for All, Big or Small

Mahoto Harada, ’04 BSB, and Alejandro Vargas, ’04 BSB, share a basic philosophy: In this day and age, no matter where you live, you should be able to buy the product you want at a reasonable price.

“We have the internet, we have all sorts of digital payment methods, we have cross-border shipping that is easy,” says Vargas.

Despite living on different continents, the two Carlson School of Management graduates and close friends have teamed up to bring that vision to reality. Together, they’re building and running Lingble, an e-commerce solution that offers companies— particularly those with international fans or global aspirations —a way to reach customers scattered across the globe.

In the era of Amazon, that might not sound like a novel concept. But Vargas and Harada’s startup allows companies of all sizes to sell through their own websites, collect their own customer data, and control their own online branding and pricing strategies.

“There’s a common myth among companies that haven’t attempted to conduct their own cross-border e-commerce: having a website is all you need to sell globally,” says Vargas, who serves as Lingble’s chief operating officer alongside Harada, its CEO. “Nothing could be further from the truth.”

The complexities of selling global

Indeed, selling across borders means accounting for different languages (both to sell products and provide customer support), currencies, payment methods, shipping options, and customs hurdles. Then there’s the challenge of marketing a product in a new, unfamiliar place.

“It’s like building a physical retail shop with banners and texts in Chinese and a Chinese cash register, but the shop owner has no experience in marketing, customer support, logistics, culture, or the unique risks of selling in China,” says Harada. “Imagine doing that for 100 different countries.”

Which is where Lingble comes in. The company doesn’t actually charge fees for building out and managing a partner’s e-commerce platform; it only takes commission on sales. Currently, more than 50 brands are using Lingble, which has seen revenue growth of more than 100 percent over the past three years. The company’s 30 or so employees are scattered across more than 10 countries, with Harada living in Paris and Vargas in Hong Kong.

“My vision is to create such an agile and fluid ‘thing’ where those who want to create value for others naturally come and play,” Harada says of Lingble’s company culture.

On Lingble’s value: “Global e-commerce is a lot more than just coding. So our 10 years of struggles and the successes in actually operating a global e-commerce of our own have been one of the reasons why our partners choose us.”

A dream that started at Carlson

Vargas and Harada came from opposite sides of the globe to the Carlson School.

Vargas, who was born in Chile, was living in Colombia when his great aunt offered him the chance to stay with her in Rochester, Minnesota, if he wanted to attend college in the United States. Harada came to Minnesota from Japan and originally planned to study art.

They both excelled academically at Carlson and sat next to each other in Management 1001. Despite having very different personalities—Harada is reserved, while Vargas will seemingly talk to anyone—they clicked. Harada remembers Vargas coming over and interrupting his studying to drag him to social events. They studied abroad in Japan together, bought—and sold—matching used Audi TT sports cars as seniors, and visited each other’s families.

But they also talked about business ideas while grabbing lunch at Chipotle and getting coffee.

“We always talked and dreamed about doing something together, and it happened,” says Vargas. 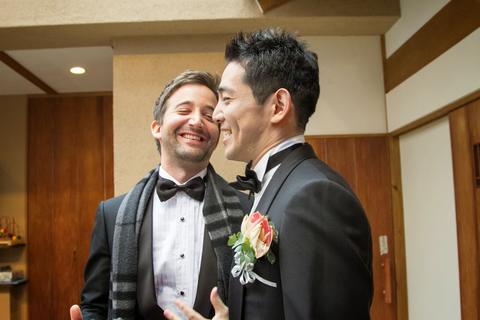 Harada, meanwhile, joined Senko Group, a global logistics company, and moved between Japan, the Netherlands, and China, before getting his MBA from the International Institute for Management Development in Switzerland. In the meantime, he also started a side project with his sister selling Japanese denim abroad, mostly through Japanese e-commerce site Rakuten.

But when Harada unexpectedly encountered a serious issue with Rakuten, which started exerting legal pressure, he turned to his friend.

“He saved me,” Harada says of Vargas.

The two started having regular conversations about strategy and the big-picture direction of the venture. As their vision solidified and went beyond specific products to global e-commerce access and management, Vargas became more and more involved.

In January 2016, he took the leap, leaving his law career for the startup.

“I wouldn’t have jumped and left the career that I had if it was just to do a small denim shop,” he says. “It was really about this scalable, invaluable expertise that we had collected over the years.”

Of course, the prospect of working with someone he considers “like a brother” was another key selling point.

“We used to play PlayStation 2 until 4 a.m. when we were students,” Harada says, “but now it’s like playing a more advanced, exciting super game together.”