Let your classmates know what you’ve been up to since graduation. Submit a class note for publication in the alumni magazine.

Note: While we welcome alumni news, the Carlson School does not verify Class Note submissions and is not responsible for the accuracy of the information contained in Class Notes.

Mark Paper, ’54 BSB, recently began his 60th year as president of Lewis Bolt & Nut Company, a 94-year-old family-owned business that employs 275 people. Mark has been married to his wife, Francie, for 63 years, and enjoys walking and biking.

Harald Borrmann, ’76 BSB, retired from his role as president, CEO, and board chair of Catholic United Financial at Catholic United after 12 years of service and 32 years in the reinsurance industry. He continues his roles on several nonprofit boards of directors and as a member of the Board of Directors of SFM Mutual Insurance Company.

John Flood, ’87 BSB, was appointed to CynergisTek, Inc. board of directors. Flood is a founding partner of the CraigHallum Capital Group, and he will be a member of the board’s audit committee.

Kathryn “Kit” Matthew, ’88 MBA, was nominated by President Joe Biden to be a member of the National Council on the Humanities.

Jeff Weirens, ’88 BSB, published a new book, The Synergy Solution: How Companies Win the Mergers & Acquisitions Game, earlier this year. Weirens is also a global business leader at Deloitte and serves on the Carlson School Consulting Enterprise Executive Advisory Board.

Joe Green, ’90 MBA, has joined Faegre Drinker as counsel in the finance and restructuring practice group.

Carmen Volkart, ’90 MBA, started a new role as a member of the Board of Directors at Antares Pharma, Inc.

Rahoul Ghose, ’91 MBA, was among the winners of the Minneapolis/St. Paul Business Journal CIO of the Year ORBIE Awards in 2021. Ghose is chief information officer at ECMC Group.

Mary Zimmer, ’92 MBT, started a new role as a member of the Board of Directors at Alerus Financial Corporation.

Jean Guezmir, ’96 MBA, was among the winners of the Minneapolis/St. Paul Business Journal CIO of the Year ORBIE Awards in 2021. Guezmir is senior vice president and chief information officer at St. Catherine University.

Sandra Strand, ’97 MBA, was honored by the North Dakota State University Foundation with an Alumni Achievement Award in 2021.

Dawn Hukai, ’98 PhD, started a new role as the acting dean of the UW-River Falls College of Business and Economics.

Kathy Tune, ’00 MBA, is now a member of the board of directors at Electromed, Inc.

Matthew Sweeney, ’01 BSB, is now the vice president and chief financial officer at Midwestern University, a promotion from controller. Sweeney has been with the university since 2011.

Dennis Anding, ’02 BSB, started a new role as a partner at Crowe.

Kathryn Freytag, ’02 MBA, was among the winners of the Minneapolis/St. Paul Business Journal CIO of the Year ORBIE Awards in 2021. Freytag is vice president and chief information officer at Donaldson Co., Inc.

Jason Lee, ’02 MBA, started a new role as a director of strategy, and operations at Beyond Finance.

Adam Rowan, ’02 BSB, started a new role as a principal business architect at Medica. Rowan has been with the company since 2012.

Melinda Pavek, ’03 MBA, started a new role as the consul general of the United States of America for the Kolkata Consular District in India. The role is responsible for advancing U.S.-India relations in the region.

Andy Schornack, ’04 BSB, was recognized as a 40 Under 40 honoree by the Minneapolis/St. Paul Business Journal for his leadership in the community. Schornack is the Flagship Bank CEO and president of Security Bank & Trust Co.

Scott Neils, ’06 BSB, ’07 MACC, is now the interim chief financial officer at Xtant Medical Holdings, a promotion from controller. Neils has been with the company since 2019.

Fred Spencer, ’08 MBA, and Perteet Spencer, ’06 MBA, launched AYO Foods in 2019, a line of West African-inspired meals, diversifying the offerings in the frozen foods aisle. In October 2021, they expanded to nationwide distribution when Target joined other major retailers, including Kroger and Whole Foods, in carrying the brand. AYO, which means “joy” in the West African Yoruba language, uses recipes from the Spencer family’s own traditions.

Claudia Drayton, ’07 MBA, was appointed to the Board of Directors of 3D Systems Corporation. Drayton is the chief financial officer of Quantum-Si.

Matthew Reck, ’07 BSB, chief financial officer at HelpSystems, was honored by the Minneapolis/St. Paul Business Journal with a CFO of the Year Award in 2021.

John Sikora, ’07 BSB, started a new role as a chief financial officer at Bremer Bank. Sikora has been with the bank since 2017.

Na Sun, ’07 MHRIR, is head of compensation programs at Redfin.

Merchology.com, co-founded by Ally Delgado, ’08 BSB, has grown significantly over the past year, including hiring 60 new employees, opening a new headquarters, and a third production facility.

Terry Haider, ’08 MBA, along with his wife, Colleen, founded the TC Haider Group.

Ashley Johnson, ’10 BSB, started a new role as a senior property accountant at Target. Johnson has been with the company since 2014.

Monzur Morshed Patwary, ’10 BSB, a senior manager at BRAC, the largest development organization in Bangladesh, has led two COVID-19 response projects in the country. His work has included the distribution of 3.5 million reusable masks, installation of more than 500 handwashing stations, and identification of 8,000 suspected COVID-19 cases. The projects also distributed COVID-related informational materials to half a million people, provided information about accessing telehealth services, raised awareness of vaccinations and preventive measures with 3,400 community religious leaders, and designed comics and murals geared toward creating change agents in school-age children.

Rob Klee, ’11 MHRIR, started a new role as director of benefits at Sony.

Asha Sharma, ’11 BSB, was appointed to the Board of Directors for AppLovin. Sharma is the chief operating officer for Instacart.

Anne Steiner, ’11 MBA, is now chief executive officer at Cprime, a promotion from head of product and technology. Steiner has been with the consulting company since 2017.

Bailey Black, ’13 BSB, started a new role as director of merchandising at FabKids.

Jana Cinnamon, ’14 MHRIR, is now a partner at Abdo. Cinnamon is the first non-CPA partner in the firm’s history.

Blake Corson, ’14 MBA, has started a new role as vice president of institutional trust at Union Bank and Trust Company.

Anders Gregerson, ’14 MBA, started a new role as an account director at Sinequa.

Robert Keller, ’14 BSB, was promoted to assistant vice president at Monroe Capital in Chicago, where he evaluates and manages investments in non-investment grade debt.

Kari Mykerezi, ’14 BSB, was promoted to director of CPG data analytics at Nielsen, a promotion from senior manager. Mykerezi has been with the company since 2014.

Christina Brooks, ’15 MBT, was promoted to director at Redpath and Company, Ltd, a promotion from senior manager. Brooks has been with the firm since 2013.

Whitney Heber, ’15 MBA, started a new role as a senior product sales manager at Schwan’s. Heber has been with the company since 2016.

Marc Carlson, ’16 MBA, was among the winners of the Minneapolis/St. Paul Business Journal CIO of the Year ORBIE Awards in 2021. Carlson is vice president and chief information officer for Land O’Lakes Inc.

Christopher Johnson, ’16 MBA, retired from the United States Air Force after 23 years of active duty and has started a new position as education and awareness control officer at Wells Fargo.

Hannah Poss, ’17 BSB, started a new role as a deals advisory senior associate at PwC. Poss has been with the firm since 2017.

John Wendorf, ’17 BSB, is now a strategy manager at Accenture, a promotion from Strategy Consultant.

John Curry, ’18 MBA, is now the president of Knutson Construction, a 110-year-old family business. Curry retired from the NHL in 2015.

Sydney Sturm, ’18 BSB, is now an account manager at Rokt, a promotion from account coordinator. Sturm has been with the company since February 2021.

Parker Olson, ’18 BSB, left his consulting job to launch Fôrij, a food brand focused on incorporating the medicinal qualities of functional mushrooms into everyday foods. Fôrij’s flagship product is a functional granola, which

can be found online or in retail stores primarily in southern California. Olson and Fôrij were recently awarded by Good Housekeeping Magazine and Clean Eating Magazine. Olson now lives out of a pop-up camper van while he travels around the country promoting Fôrij and introducing consumers to the energizing and anti-inflammatory benefits of these mushrooms.

Natalie Kincs, ’20 BSB, started a new role at Storm Creek as an inside sales and account manager.

John Reichert, ’20 MBA, started a new role as a consultant for PA Consulting.

Elizabeth Ann Ullyot, ’21 MBA, was recognized as 40 Under 40 honoree by the Minneapolis/St. Paul Business Journal for her leadership in the community. Elizabeth is an associate brand manager of Malt-O-Meal at
Post Consumer Brands.

Charlotte Phillips, ’74 MBA, died in December 2021. Born in Vermont in 1931, Phillips education commenced in a one-room schoolhouse but culminated in her MBA from the Carlson School in 1974. Phillips was a Colonel in the U.S. Army, who served her country at stations home and abroad. After retirement, she earned her Master’s in Divinity, traveled the world and the U.S. in her RV with her partner and their many pets, and remained active in her local VFW, Army Retirement Center, and Women’s Army Corps.

Former Carlson School Professor of Finance Paul Jessup died in September 2021. In addition to his time at the University of Minnesota, Jessup served on the faculty at Hamline University, was an economist on the U.S. House Banking Committee in 1963-64, and authored five books.

Lee Skold, ’74 BSB, ’76 MBA, a former student and advisee of Professor Jessup and an emeritus member of the Carlson School Board of Advisors, remembers him fondly. “Paul was a terrific mentor. I’ll always appreciate how he would challenge me and delegate responsibility to me as a teaching assistant. He enabled me to learn more than I was taught—a lesson I treasure and try to pass on to others to this day.” 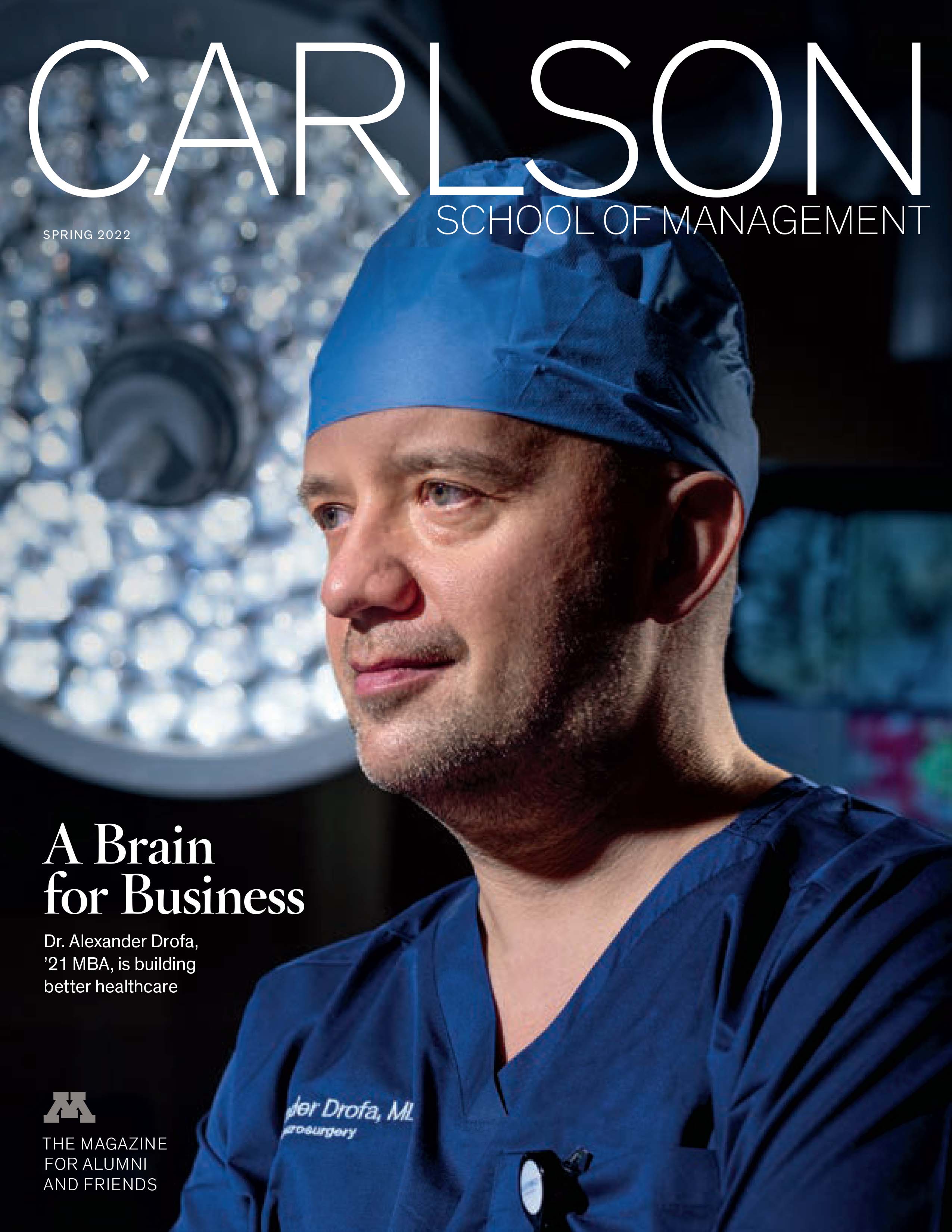