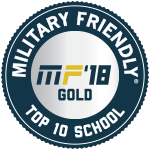 Military Friendly has ranked the Carlson School MBA Programs as second best in the nation in the category of graduate schools. Military Friendly is a division of Victory Media, which for more than a decade has surveyed thousands of institutions and assembled lists that capture best practices in recruitment and retention of military employees, students, and franchisees. A full list of ranked schools can be found on its website.

To be considered for the Military Friendly list, a school’s military recruiting program is measured in three primary areas in how well it:

- Engages the prospective military student or employee in a recruiting environment

- Employs the military student or employee in meaningful employment

Several years ago, the Carlson School established the Military Veterans Initiative, a program to attract more veterans into the MBA Programs.