To promote moral courage, integrity, and civic-minded leadership, the family of Thomas E. Burnett, Jr., ’86 BSB, is establishing a scholarship at the Carlson School of Management to honor Tom’s life, leadership, and sacrifice on September 11, 2001. 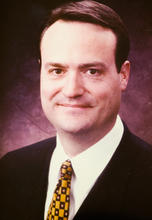 Burnett was a passenger on United Flight 93. His plane was hijacked by Al Qaeda terrorists determined to destroy American lives and symbols of our freedom and democracy. He and fellow passengers and crew made a decision that changed the outcome of the deadliest attack on American soil. In his final words, in a phone call to his wife, Burnett said they were going to “do something.” Because they fought back, Flight 93 crashed into a Pennsylvania field, leaving the two potential targets, the U.S. Capitol and the White House, unscathed. Tom’s role in this pivotal moment on 9/11 has made him a hero to his family and to the nation.

“We are grateful and humbled by the Burnett family’s generous gift,” says Carlson School Dean Sri Zaheer. “Instilling the values Tom lived by into the next generation of leaders will make a lasting mark not only on the scholars, but on the Carlson School community, the business community, and society. Twenty years later, Tom’s legacy lives on and his final words—‘do something’—serve as a clarion call for each of us today.”

“As a family, we’ve sought to “do something” that would have long-lasting impact and build upon Tom’s values, specifically his belief that democracy required an educated citizenry to thrive,” says Martha Burnett Pettee, Tom Burnett’s sister. “In recognition of the 20th anniversary of the 9/11 attack, we’re creating an endowed Burnett Scholar program at the Carlson School with a donation of $300,000 to establish the scholarship.”

The Burnett family says their aim is to provide opportunity for Minnesota students who have demonstrated leadership, service, and scholarship in their high schools and communities. As Burnett demonstrated in his life and his last moments on Flight 93, the family seeks to help develop leaders who listen, assess, and make decisions for the common good, regardless of the pressures to do otherwise. They imagine Burnett Scholars will change the world for the better with their high ideals and determination to “do something” right, good, and of lasting benefit for all.

The first Carlson School Burnett scholarships will be awarded in fall 2022. Along with academic achievement, preference will be given to Minnesota residents as well as those with a demonstrated track record of leadership and community service.

If you would like to join us in honoring Tom and supporting the development of young leaders, go to http://z.umn.edu/tburnett.

Since 9/11, through the Tom Burnett Family Foundation, the Burnett family has supported education and citizenship through: