Seth Werner believes there is an intersection between how students want to learn and how he wants to teach. “In the past, there was this notion of the ‘bank model’ of learning. Empty vessels came to be filled with knowledge from a great sage,” he says. “Today, I think more about knowledge co-creation. We have great foundational ideas out there, but they are not set in stone. We can use the classroom as a site of creation, not transmission. Students today are so used to having agency in what they consume, so I try to create the space for them to do that.”

What is driving the educational needs of today’s students is their information access and their constant creation of things, Werner believes. “They may not explicitly see themselves as creators, but they are,” he says. “All the time. My sense is that today’s environment better facilitates and showcases individual-level creation.”

Werner says instructors can best adapt to these changes by being open. This doesn’t mean not having a plan, but having a plan that embraces and creates opportunities for knowledge co-creation. “I will present an established model in class and ask for questions. Then later in the class I’ll present ideas that contradict the model,” he says. “Let them see and make the connections, but more importantly, now that they know they can do it, I push them to add their own critiques or improvements.” He says this process has led to many student-identified changes to models—ones that he had not thought of.

“One of my primary goals in teaching is really about creating knowledge that students can take to work the next day and use in a meeting,” he says. “I wanted a way to create explicit connections of the course content to their everyday lives.” From this was born “Marketing in Your Daily Life”—a concept sort of like examining the front page of the newspaper through a marketing lens. “Now every class starts with the application of class material to current events,” he says. “There are of course easy ones, like unpacking the motivation behind Super Bowl ads, but I really like the deeper ones that involve seemingly non-explicit marketing activities.”

Along the lines of co-creation of knowledge, Werner thinks about “learning by doing.” He says guest speakers are great for sharing stories and providing examples, but there is a limit to their effectiveness. “Occasionally you can convince them to set up their talk with a participation component, but in the end it is confined to a class period and limited depth,” he says. Werner prefers “live clients.” These are real-life people with real-life challenges. The students get to be a part of that person or firm’s growth, and again, they have agency in the outcome. “Last year, we worked with a client that was trying to increase engagement with the Mississippi River. The student’s recommendations informed a new kayak share program,” he says. “This is a tangible outcome they can see every time they walk over the Washington Avenue Bridge and look down at the shore and see the kayak share lockers.”

Another “tangible” is the store shelves that Werner sets up in his classroom. A few years back, he reconnected with a former student, Mike Guanella, ’06 MBA, who was just put in charge of Hormel’s $700 million acquisition of Skippy peanut butter. “The next semester I reached out to him to come and talk about Skippy and the challenges the category was facing. I just thought having the entire shelf set there would really help the students better understand the category,” he says.

Guanella has made several more visits to the class with updates and more stories using the prop shelves. Werner also has embedded the shelves into the curriculum in other ways, so they are part of the class now even when Guanella doesn’t visit.

As engaging as the shelves and other forms of knowledge co-creation are, Werner says more can be done. “Volunteering to be a chaperone on my daughter’s fieldtrips reminded me that the model of the classroom as the site of learning needs to be changed,” he says. So this semester, his MBA marketing research class has six “site visits” where the class session will be held somewhere other than the classroom. “Bringing the shelves to the class is a step in the right direction, but bringing the students to the shelves is even better,” he says. 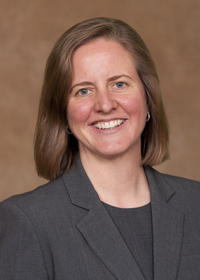 How about bringing students to the other side of the world without leaving the classroom? MA-HRIR Program Director Stacy Doepner-Hove teaches two live courses with a counterpart, Dr. Bernd Irmer, at the Queensland University of Technology (QUT) in Brisbane, Australia. QUT and the Carlson School have partnered with semester exchanges for several years.

“We each have a class in our respective schools and we co-teach using technology so that the class can see and respond to us at the same time,” she says. “The students are put into small groups that are mixed between the two schools, so they have to work in virtual cross-cultural teams.”

Currently, the undergraduate course is in its fourth year. The graduate course finished its second year last fall. With a 15-hour time difference between the two countries, the Australian class meets in the morning and the Carlson School course meets at night.

The genesis of these co-taught virtual courses came about during a face-to-face meeting Doepner-Hove had with Irmer when she was in Australia with her undergraduate students. “We started talking about educational philosophy and we thought the course could be a lot better if we tried this,” she says. “We decided to do it at the graduate level, too, and add a live case.”

With the live case, students are introduced to a real-life business challenge and work on the problem virtually with their Australian counterparts, acting as a kind of consulting group. The difference between the undergraduate and graduate courses is that the undergraduates ultimately visit Australia while the graduates remain in a virtual relationship with their overseas classmates. “There is actually more virtual work done at the graduate level because the whole semester is virtual,” Doepner-Hove says.

Students seemed taken by the courses. “We get good feedback from both levels that the course provides something they don’t find in other courses,” Doepner-Hove says. “They like the realness of having some work to do. They appreciate the fact they can have that experience before they get out into the workplace and have to do it in the real world. And with the live case component, the undergraduate students here and in Australia get to know each other a little bit.”

Also, the experience gives students a chance to study the pitfalls in working with virtual teams. “Working virtually and working globally is beginning to be a part of everyone’s life,” she says. “This allows them to work through bugs or things that aren’t so great. They can use this experience to improve virtual workplace teams in the future. It’s really a safe space. If they mess up in school, they might get a bad grade but don’t drop a million-dollar client.”

Senior Lecturer Rand Park considers his undergraduate class Corporate Responsibility and Ethics “hybrid” because he does spend time in the classroom lecturing about topics, but he also “flips” some assignments. “Instead of showing a short video in class and then having a discussion, I will often put the link to the video on my Moodle [an online learning platform] site and have the students watch the video over the weekend and fill out a short feedback assignment,” he says. Then, the next time the class meets, it begins with a discussion about the assignment. Since the students have already watched the video and filled out the feedback assignment, they can go directly to a discussion, saving class time.

Park also has implemented some fully online components into his curriculum as well. “I have two Moodle forum assignments in which students both read a case and have an online discussion about it with other students,” he says. Everyone must post one original discussion topic about the case and respond to at least two other students’ original posts. In this manner, Park can build in more “discussion” outside of class.

“Students are not always fully engaged during class so we need to find a way to grab a share of their out-of-class screen time in order to best deliver our content.”

“Online forums serve another function as well,” he says. “Because they are asynchronous and don’t involve public speaking, shy students can respond without fear of embarrassment. The extra writing practice also helps because there is always a writing section on my exams.”

Last November, Park discussed his adventures with alternative teaching methods at “Redesigning your Course for Flipped and Online Learning,” a panel discussion sponsored by the Office of Information Technology featuring faculty members from three different colleges at the University. The common consensus was that the future is here. “This is a digital generation,” Park says. “Students are not always fully engaged during class so we need to find a way to grab a share of their out-of-class screen time in order to best deliver our content.”

Also, with more students for whom English is not a first language, online material means that students can take more time to read, reflect, and write than limited classroom time may offer. Another plus is cost. “I am able to deliver a digital course pack through the University library that is significantly cheaper than requiring students to buy a hardcover book,” he says. “The weekly readings are posted on Moodle—no book to carry or lose.”

Leveraging digital technology in coursework for a “digital native” generation also helps them be ready to be productive in their future careers. “Students use their devices for social networking and entertainment already,” Park notes. “We can help them pivot those skills into a work relevant environment through serious assignments and activities online. They need to develop skills in our courses that are directly related to future work—being able to write, think critically, work collaboratively, and calculate accurately.”

This feature originally appeared in the Spring 2017 edition of the Carlson School Alumni Magazine.

This article appeared in the Spring 2017 alumni magazine

Learning doesn't just take place in the classroom anymore. In this issue, we explore how the Carlson School is thinking outside-the-box to meet the education needs of today's students.