Talk to anyone who works with those battling addictions and they will tell you that one of the most important things you have to do is treat the whole person. Only through understanding all of the unique circumstances someone faces can you determine which methods have the best chance of leading to long-term sobriety and health.

For more than 70 years, the Center City, Minn.-based Hazelden Betty Ford Foundation has taken that approach with its individual patients and continuum of care model, to much success. But, recently, its leaders realized they had not applied that same thinking more broadly and in retrospect to the hundreds of thousands of patient records accumulated at Hazelden Betty Ford facilities over the years. They wondered, “what story do those records tell about our patients?”

For answers, they turned to the Carlson School’s Analytics Lab. During a semester-long project, a team of five Masters of Business Analytics students, guided by professors and staff, used artificial intelligence to analyze more than 250,000 records in search of data patterns invisible to the naked eye. They found critical information that will inform new research and ultimately empower Hazelden Betty Ford to better serve its patients.

“There aren’t very many treatment systems that use their data to further research in this area,” says Quyen Ngo, executive director of Hazelden Betty Ford’s Butler Center for Research. “Thanks to the Carlson School’s cutting-edge technology and expertise, we were able to examine real-world data in a way—and in a volume—that is new to us and to our field. Together, we gained numerous, interesting insights that went deeper than we even expected—to the core of how addiction, treatment, and recovery work.”

So, what did the students find out? Let’s take a journey with them.

“The students really rose to the occasion and helped us advance our knowledge in this area tremendously."
– Quyen Ngo, executive director of Hazelden Betty Ford’s Butler Center for Research 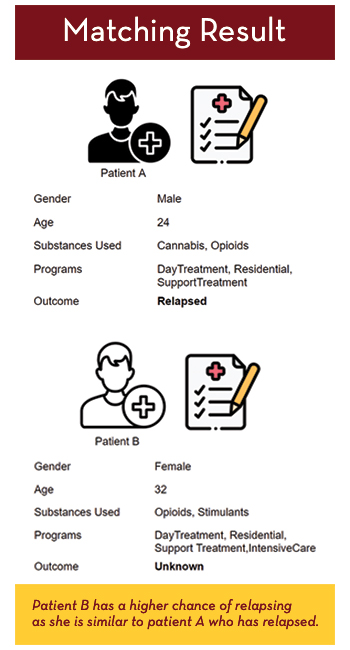 Staring at a digital stack of records for a quarter million patients, covering 11 different data sources that Hazelden Betty Ford collects, the students had to decide where to begin.

“It was a little challenging,” admits team member Mainak Roy (‘20 MSBA) “It took us about a month to get our hands on the data and dig into it. [But], the project narrowed from there.”

The students designed a straightforward approach, grounded in finding “unobvious and of interest” information. First, they would determine who a “typical” patient at Hazelden Betty Ford is —age, gender, race, profession, etc. Then, they would look at how often that patient comes to Hazelden Betty Ford, what the encounters are like while there, what diagnoses they received, and the patient’s feelings about their experience. Simple enough, right? Not so fast.

“Low sample size limited us at times,” team member Rikarnob Bhattacharyya (‘20 MBA) says. “For example, almost 90 percent of patients did not have a profession listed. We recommended to Hazelden Betty Ford that they should institute practices that make sure patients are filling out the questionnaire for a more complete dataset.”

Still, using a mix of at least a dozen sophisticated software and other tools, the team found that:

As part of that process, the team built a dashboard to show the data in an easy-to-understand, visual way. Building that tool provided Hazelden Betty Ford with the ability to continue analyzing its data moving forward. It also allowed the team to take the next step in its work: understanding who returned to using substances after their initial treatment, a key success metric for Hazelden Betty Ford to consider, according to the team’s final report.

After accounting for differences in patients’ demographics and social history, the analytics team was able to sort the records according to whether each patient returned to using alcohol, returned to using other drugs, or experienced no recurrence of use, or relapse, at all. Team members found that gender, age, type of substance used, and the number of substances used all correlated—in varying degrees—to a patient’s risk for returning to use. For example,

The team also found, somewhat surprisingly, that risk for relapse may be less related to the number of substances used than the type of substance used

“Our intuition was that more substances would translate to more severe addiction and higher rates of relapse,” says Roy. “But, that was not the case. In fact, it was just the opposite.”

This finding will help add to the knowledge base that enables clinicians to adjust care for patients who are at higher risk. It also will be the foundation for a new Hazelden Betty Ford research publication that the nonprofit plans to share with the entire addiction-treatment field.

“The students really rose to the occasion and helped us advance our knowledge in this area tremendously,” says Ngo, from Hazelden Betty Ford’s Butler Center for Research.

One important finding stuck with the Carlson School team: young people are more at risk to suffer from substance abuse issues.

“A lot of the project hit close to home,” says Batool Fatima (‘20 MSBA). “It was a type of project that I had never experienced before, but I quickly found that you can apply data analytics knowledge to solve all sorts of problems. It was great to be able to work on an important cause and help be a solution to some of these issues.”

Substance abuse disorder, known colloquially as addiction, is a disease affecting more than 20 million Americans each year, according to the 2018 National Survey on Drug Use and Health, and an area where there's still a lot to be learned.

“Obviously the impact of helping people who need help was what drew me to this project,” Roy adds. “Especially people who could potentially ruin their lives because they are addicted to a chemical or they’re not able to support themselves or their families. So I thought if there was any way I could use my knowledge to help, then it would be something that I would be very proud of.”

“The skills you learn throughout the [entire MSBA] program are great, but being able to apply them in a project like this one is really important."
– Mainak Roy, ‘20 MSBA

From the outset, the Hazelden Betty Ford team challenged the Carlson School students to be creative. The groups met weekly, trading ideas and ensuring the final results would help Hazelden Betty Ford make meaningful changes to the way it cares for its patients. The project culminated with a formal presentation of the findings to Hazelden Betty Ford, lasting more than an hour.

Working with incomplete datasets, trying new approaches, and running multiple analyses to make sure the results are robust are all skills MSBA students learn at the Carlson School. With the guidance of faculty advisors Ravi Bapna and Soumya Sen, who provided expertise, technical skills, and advice, the students were able to navigate complex analytics problems. This project provided the students with real data analytics project experience they can use to build a career in the field.

The Hazelden Betty Ford project is just one example of the work the Analytics Lab takes on. Since its start in 2015, they’ve worked with clients including the Mall of America, Land O’ Lakes, and Sun Country Airlines, as well as non-profits, government entities, and others. The Lab considers new projects each December and allows the students to choose which ones to work on.

“Living true to our Carlson School’s motto, 'Business as a force for good,' we are now working with Hazelden Betty Ford to plan a second phase of this research project that will further demonstrate the power of business analytics in providing solutions to societal challenges,” said Sen, associate professor of Information and Decision Sciences.

After graduating in May, Roy took a job as a senior data analyst at Capital One. The skills he learned both from the MSBA program itself, as well as the Hazelden Betty Ford project, have proved to be instrumental.

“The skills you learn throughout the [entire MSBA] program are great, but being able to apply them in a project like this one is really important,” Roy says. “Even though work at a financial institution like Capital One and a healthcare facility like Hazelden Betty Ford is so different, the skills and techniques you use are the same. They can be applied to just about anything."