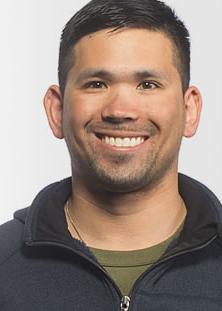 “Leaving the Marine Corps, I needed an institution which would not only provide a solid educational foundation, but would help to prepare me for life after graduate school.”

My Minnesota story starts in 2014.  Like many Minnesota transplants, usually they come to the state because of someone else, and in my case it was my wife.  After 8 years in the Marine Corps, I decided it would be best to separate from the service and begin a new career in business.  As I contemplated working vs returning to school, I realized that if I truly wanted a successful business career, I needed to ensure I had a solid educational foundation.

When I was looking at business schools, I wanted to find a school that would not only provide a great education but would also be a great fit for me personally.  Deciding to transition from the Marine Corps was one of the hardest decisions in my life.  I really didn’t know what to expect from graduate school and I didn’t know how I was going to handle going back to school after being out for 8 years.  The main reason I chose Carlson was mainly due to their recent Veterans’ Initiative.  This initiative was a commitment by Carlson to help veterans further develop the skills they learned in the military and couple it with a fantastic business education.  Their recruiting efforts meant that coming into Carlson, I had over 20 other veterans who were all in the same situation as me and who have served as a great support system.

So first things first, it’s cold…I mean really cold.  But after my first winter in Minneapolis, I can honestly say it wasn’t that bad.  Minneapolis continually surprises me.  Despite being cold, the city is unbelievably active.  On any given day, you can easily find somewhere to go ice fishing, cross-country skiing, or snowshoeing.  If outdoor winter sports isn’t your thing, there is plenty to do inside.  Like most graduate students, beer plays a major role, and I can say without a doubt that Minneapolis is a great beer city.  There are tons of local breweries and bars that offer amazing craft beers from the Midwest and beyond.  In addition to this libation, the food scene is truly amazing.  I grew up in the military and have lived all over the world so I was worried about the rumors of Minnesota cuisine consisting mainly of butter and Jell-o products, but I was way off.  From hearty Midwest fair to Vietnamese Pho soup, Minneapolis has one of the best, most authentic food scenes that I’ve ever experienced.  Give Minneapolis a try and I guarantee you won’t be disappointed.