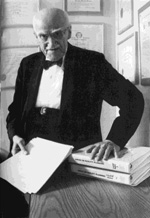 Dr. Joseph M. Juran, a 1924 graduate of the University of Minnesota with a degree in electrical engineering, first began developing his philosophy of quality in 1926 when he started working for the quality inspections division at Western Electric. At the time, managing for quality emphasized statistics and production techniques. Dr. Juran theorized that the field really depended on human factors, especially the work of managers, and that quality problems should be solved systemically. By engaging leadership in addressing quality at its most fundamental levels, Dr. Juran realized there would hardly be a limit to a company's potential for success.

In 1951, Dr. Juran's philosophy coalesced in the first edition of Juran's Quality Handbook, which is now in its fifth edition. It became the handbook for the new discipline of quality management and helped establish Dr. Juran's international reputation as the thought leader of the quality movement.

Beginning in 1954, Dr. Juran heavily influenced the development of companies in Japan's postwar economy. His work developing a culture of quality within these burgeoning companies helped lead to Japan's preeminence in quality achievement in the 1970s and beyond. In recognition of his contributions toward reviving the Japanese economy after World War II he was awarded the Order of Sacred Treasure in 1981 by the Emperor of Japan.

Dr. Juran's work in Japan also helped many companies around the world develop an institutional culture of what it takes to be a quality leader. In those companies, quality work is properly valued from the lowest-level worker to the highest-level manager. A company with a cultural embrace of quality will continually strive to improve and learn from past mistakes. Industry leaders in the U.S. acknowledge that the quality renaissance during the 1980s and '90s that contributed to enormous prosperity in the U.S. was influenced by Dr. Juran's ideas. In recognition of his contributions to the U.S. competitiveness, Dr. Juran was presented with the National Medal of Technology in 1992 by President George H. W. Bush.

Dr. Juran's thinking on quality wasn't limited to planning, control and improvement. In the closing paragraph of his 2003 autobiography, Architect of Quality (p. 365), Dr. Juran had two messages: "To those whose careers are in the field of managing for quality: thank your lucky stars. Your field will grow extensively during your life-time, especially in three of our giant industries—health, education and government. There will be exciting opportunities for innovation and for service to society."