History & Founders of the Funds Enterprise 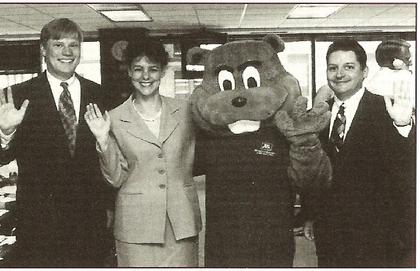 It all started in 1997, when University of Minnesota Professor- Tim Nantell- made a special visit to Dean Kidwell's office to explain to the Carlson School Dean that the school is situated near a large financial community and that students at the Carlson School of Management could greatly benefit from the expertise of the professionals in the area.

It wasn't until 1998, that the program started to take shape. A group of investment professional visionaries set out to build what is now one of the most successful student-managed funds in the country. Based on the model created by The University of Texas McCombs School of Business, this group of dedicated investment professionals were able to convince Carlson School leaders that this program would teach students how to apply their learning to the real-world and would have a substantial impact on the caliber of students entering, as well as graduating from, the Carlson School of Management.

The program, originally known as the Financial Community Partnership Program (FCPP), was established in early 1998 and launched the Golden Gopher Growth Fund when US Bank invested the first $1 million. This program was positioned to be the "bridge" between the theory-based academic world and an application-oriented financial industry and became so successful that local companies invested an additional $11 million to start the Carlson Fixed Income Fund in 2003.

Bruce Anderson cofounded the investment firm Welsh, Carson, Anderson & Stowe, or WCAS, and has been a general partner of WCAS since March 1979. Prior to that, he served for nine years with Automatic Data Processing, Inc., or ADP, where, as executive vice president and a director of ADP, and president of ADP International, he was active in corporate development and general management. Before joining ADP, Mr. Anderson spent four years in computer marketing with IBM. He holds a Bachelor's degree from the University of Minnesota.

Bill Dudley forged a 41-year career with American Express Financial Advisors that began in 1955 in the Securities Research department at IDS. In 1989, Dudley was instrumental in founding the Friendship Foundation; a nonprofit organization dedicated to helping children and adults with mental retardation and other department disabilities, and their families. Dudley received a Bachelor of Science Degree in Business from the Carlson School of Management and is a graduate of the Harvard Business School's Advanced Management Program.

Herb Hanson, who was a former member of the Carlson School's Board of Overseers, founded the San Francisco-based Hanson Investment Management Co., a money management firm with more than $3 billion in assets when he retired in 1993. Hanson said his gift is in gratitude for the education he received at the University of Minnesota. Hanson helped launch the Carlson Funds Enterprise and provided the lead funding for construction of Hanson Hall, which houses the Carlson School undergraduate business program. Hanson said he credits his success to the late professor Arthur Upgren, who became a close friend and mentor. Herb received his degree in economics from the University of Minnesota.

Al Harrison is the retired Vice Chairman of the Board for Alliance Capital Management Corp. He holds a B.A. and M.A. with honors from Christ's College, Cambridge University, in England. Prior to joining Alliance Capital in 1978, Harrison was President, CEO and cofounder of IDS Advisory Corp. He had previously managed the IDS Progressive Fund, a large mutual fund oriented to capital appreciation. He and his wife have generously supported the arts and championed organizations and institutions focusing on higher education, international health and human services, and children's health.

Mr. Lou Nanne is a Senior Managing Director and National Sales Manager at RBC Global Asset Management (U.S.) Inc. He is responsible for oversight of institutional sales and marketing efforts throughout the United States and Canada. Mr. Nanne has been in the investment industry since 1991 and joined the firm in 1994. Mr. Nanne has received a B.S.B. from the University of Minnesota.

Tim Nantell has been an instructor at the University of Minnesota since 1980 and has held positions including Acting Dean, Associate Dean of Faculty, Finance Department Chairperson, and Faculty Director of the MBA Program. He was instrumental in the development and launch of the Carlson Funds Enterprise. His current research and teaching interests concern valuation models and their application. He has been recognized for teaching excellence in the MBA Program a number of times and was named 'Dedicated Faculty Member of the Year' by the MBA classes of 2002 and 2003. In 2004, he was given an Outstanding Service Award by the Carlson School.

David Runkle, Director of Quantitative Research for Trilogy Global Advisors, LLC, has 20 years of investment and related experience. He joined Trilogy in 2007 from Piper Jaffray, where he was an Investment Research Manager. Mr. Runkle has been an award-winning professor in finance, accounting, and economics at Brown University and the University of Minnesota, and has served as a Research Officer at the Federal Reserve Bank of Minneapolis. In addition to holding a PhD in economics from Massachusetts Institute of Technology, Mr. Runkle has earned CPA and CFA credentials and has served on the CFA Institute's Curriculum Committee and Corporate Disclosure Policy Committee.