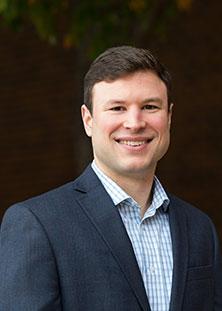 "At Carlson, you have access to all of the Fortune 500 companies in the Twin Cities as well as Carlson's connection to top consulting firms."

I was born and raised in the Twin Cities and joined the US Navy after completing undergrad at the University of Wisconsin, Madison.  I attended flight school in Pensacola, FL to become a Naval Flight Officer in the EA-6B Prowler - an electronic attack jet that flies off of aircraft carriers.  I spent the majority of my Naval career in Whidbey Island, Washington with two deployments to the Middle East, and I was lucky enough to spend the last three years teaching Naval ROTC at UCLA.

I chose Carlson because of its local and global reach.  At Carlson, you have access to all of the Fortune 500 companies in the Twin Cities as well as Carlson's connection to top consulting firms.  I  was also very interested in the experiential learning aspect of the Enterprise Program.  I think that the Enterprise Program is a great advantage that is difficult to get at a larger school.

I love to travel, but I always love coming back to the Twin Cities.  The people are great and there's always something to do.  While the winters can scare some people away, the spring, summer, and fall more than make up for it.  I really enjoy fishing and boating on the lakes and trips up to the North Shore.  Minneapolis and St. Paul also have a lot to offer with great bars, restaurants, sporting events, and local breweries.  Also, because I like to travel, being an uber ride away from a major airport is a huge plus.